Psychogenesist, which I randomly find it on Myspace, has only 4 song demo but already took the stage many times, a great band, I like it a lot and want to share with you.

Psychogenesist is a new band that is still quite unknown but i think it would be a legendary American band in the future, lets introduce your band to our readers…
Yes thank you, My name is Dan Kovacs I’m the guitar player and vocalist in the band. Our bassist is Max Case, and our drummer is Jesse Pospisil. We hail from Orange County NY just outside of NYC. We are an extreme metal band who just want to keep real death metal alive! 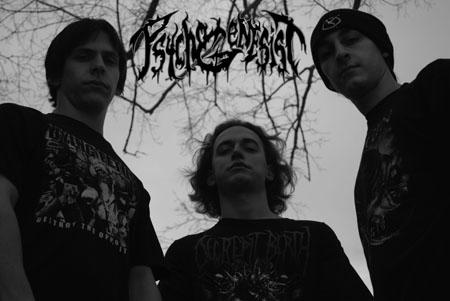 Is Psychogenesist sequel of Bone Crushing Annihilation or are there any changes in style with the new name you are mentioned?
Haha no way man! Psychogenesist is a huge step up from what we were doing in BCA. We are probably where BCA was heading, but got there faster with Psychogenesist!

In Bone Crushing Annihilation’s line up, Jesse seems to be on guitars, but he plays drums in Psychogenesist. What is the reason of not continuing with Ryan?
We had lots for good times with Ryan, but he is just not suited for the band anymore. He still plays with some other bands in the area, and we all chill at shows and shit. Yea and your right Jesse was originaly our guitar player! He decided to take up drums, his other instruement after we parted with Ryan. The dude is a demon, fury runs through his veins. It’s great to have him for this band! 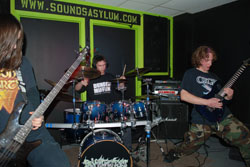 Your demo released in 2007, what have the band done in the period of 3 years?
Yea I know it has been quite a while. Having the line up change was kind of a set back, and for a while there we were just getting up to speed as a 3 piece.

What about the new album you are working on?
A good part of the time since we release our demo was spend on finishing the writing for the new album. It will have 9 songs and be entitled Beyond Imagination. This album will not disapoint anyone that has a love for extreme shit!

Have you ever talked with any label for your destructive new album?
Actually we are just starting to do this now! We will probably be working with sereval small labels in different countries to spread our shit all over the globe!

This is a 3 person band, is it caused any problems for stage, did you consider use any other guitar for stage or album?
We have considered adding a second guitarist, and have actually tried a few out. They were all great people, but kinda have a hard time keeping up with us… We are doing well as a 3 peice now, and it kinda just makes things easier. When we do the album I will record all the harmonies in the studio. We are still open to the idea of adding a second guitarist! 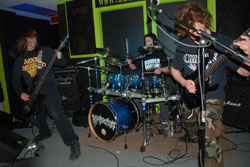 You shared the stage with bands like Cryptopsy and Vital Remains, are there any other well known Underground bands that you took the stage with? And which is the best performance and viewers?
We have diffently had some lengendary shows! Back when we still played as BCA we shared the stage with Dying Fetus, Hate Eternal, Deicide, Kataklysm, Into Eternity, Vile, Decrepit Birth, Odius Mortem, and Deeds of Flesh. I think some of our best shows have been the NY Death Fest a few years back here in upstate NY, and I think the upcoming tour is going to be pretty epic!

What about your play list? Are there any cover songs?
Na we don’t really play covers anymore. Back in the BCA days we use to play some Slayer, and Cannibal Corpse song, but now we just like to focus on our own shit. When you see us live you can expect to be assaulted by a set of at least 8 songs that are guaranteed to pulverize!

What is your favorite bands in mainstream and underground, can you tell 5 of them to us?
O man this is a tough one! Only because it chances so much. None of us care for anything in the Mainstream. I’d say my top 5 favorties right now are.
Psychocroptic 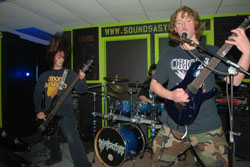 If you ask the guys they will probably give you a different list. We are all really big fans of Obscura, Opeth, Epica and any real guitar shredder out there!

And also I need bands like you, can you recommend some of them that you took the same stage?
O yea man there are some great bands over here the one i’d recommend to you the most right now are our friends Neurectomy
www.myspace.com/neurectomy

The statics show us that the visitors of Extreminal magazine mainly are from the USA in a huge part.Particularly, what are the future plans for USA in the first step and then for the Europe music medium?
We’ll for us coming from the USA really helps. The underground is pretty strong. There are tons of bands to play with, and lots of sikk fucks that like coming out to the shows and getting alittle crazy. We haven’t played in Europe yet, but i only hear good things about the scene over there. I’ve got some friends and Family out there, and we hope to make it over for some shows next year after the album is released. 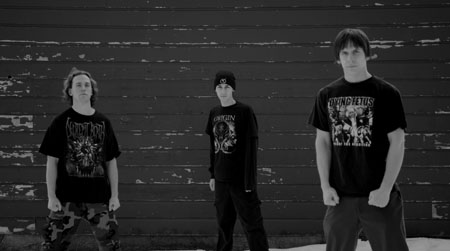 I think that all my questions are done.I hope that we will make a more detailed interview in near future after the new releases of your band,please give us you final words…
Thanks again for the interview. Keep supporting real metal. Everyone else keep supporting extreme underground metal, and come out to our shows so we can chill!