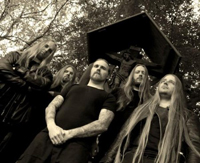 Dutch death metal band PROSTITUTE DISFIGUREMENT joined Willowtip Records’ stable of sonic chaos for the release of their upcoming new studio offering. Lovingly titled From Crotch To Crown, the long-awaited follow-up to 2008’s deviant Descendants Of Depravity full-length promises to deliver the band’s sickest, most violently aggressive and brutal material to date!
Comments team PROSTITUTE DISFIGUREMENT in a collective statement: “We’re stoked to have joined the Willowtip family because of their reputation in working with some of the purest and unique bands out there and we look forward to sickening this world together. So far, the cooperation between us is great and we look forward to working with them. From Crotch To Crown is a mix of old-school mayhem and modern, bonecrushing, technical riffing with horrifying vocals spewed from the minds of the most sick and evil beings in history!”