Denver blackened doom nihilists PRIMITIVE MAN — featuring within their ranks current and formers members of Clinging To The Trees Of A Forest Fire, Reproacher and Death Of Self — are preparing to unleash the forbidden fruit of their debut full-length. Recorded by Dave Otero at Flatline Audio (Cephalic Carnage, Catheter, Cobalt etc), the fittingly dubbed Scorn finds PRIMITIVE MAN commemorating a slow-roasted apocalypse through seven asphyxiating odes of hatred, disease and despair.
American Aftermath calls Scorn “one of the heaviest debuts by any band I have ever heard in all of my days,” noting that the offering, “isn’t your run of the mill bong-ripping doom metal that has been done a million times. This is the actual feeling of ‘doom’ in audio form. Scorn will instill feelings of dread and fear in you and you will love every freaking minute of it.” Cvlt Nation agrees commending the band’s “devastatingly crushing and austere slab of blackened, sludgy doom,” while Black Insect Laughter notes: “PRIMITIVE MAN serve you up one of the filthiest, most destructive releases you will hear this year. With vocals sounding like a swamp monster spewing up bile in bouts of hatred, the music is a gut-wrenching platter of blackened sludge, crawling out of the mire at the torturous pace of the slowest doom ever heard.” 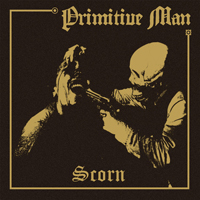 Tracklist:
01. Scorn
02. Rags
03. I Can’t Forget
04. Antietam
05. Black Smoke
06. Stretched Thin
07. Astral Sleep
Scorn will be issued on 12” vinyl January 31 via Throatruiner/Mordgrimm Records. In the meantime, get your misery on with a full album stream at THIS LOCATION.