San Diego death metallers PATHOLOGY have revealed the cover art for their new album, “The Time Of Great Purification”, due on September 25 via Victory Records. 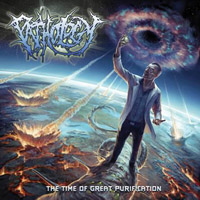 PATHOLOGY putting the finishing touches on the new CD at Lambesis Studios with Daniel Castleman.
“This is definitely our heaviest and most technical album to date,” states drummer Dave Astor.
“The Time Of Great Purification” features artwork by Pär Olofsson, creator of the cover art for PATHOLOGY’s last two albums, 2010’s “Legacy Of The Ancients” and 2011’s “Awaken To The Suffering”. The concept is simple: the doctor is controlling the 2012 apocalypse and destroying the world!
PATHOLOGY is gearing up for a twenty-six city headlining run on the “Slaughter Survivors Tour” with ENFOLD DARKNESS, FALLUJAH, FIT FOR AN AUTOPSY and AEGAEON. The tour kicks off in Santa Cruz, California on July 21.