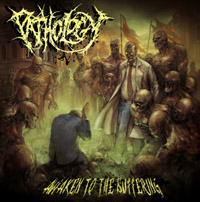 San Diego-based brutal death metallers PATHOLOGY have completed work on their new album, “Awaken To The Suffering”, for a September 13 release. The CD was recorded at Lambesis Studios (owned by AS I LAY DYING vocalist Tim Lambesis) in the band’s hometown with producer Daniel Castleman (IMPENDING DOOM, AS I LAY DYING, WINDS OF PLAGUE). This will be PATHOPLOGY’s first CD to feature the group’s new lineup, including vocalist Jonathan Huber and second guitarist Kevin Schwartz, who have spent time on the road with their new bandmates during recent U.S. and European tours with DEICIDE and OBITUARY.
The artwork for “Awaken To The Suffering” was brought to life by the twisted mind of Pär Olofsson (IMMORTAL, THE FACELESS, ABYSMAL DAWN).
Source : Blabbermouth.net

MORBUS CHRON ''Sleepers in the Rift''