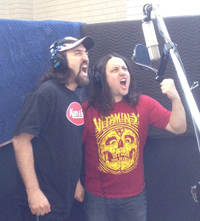 MUNICIPAL WASTE frontman Tony Foresta makes a guest appearance on the new album from PASADENA NAPALM DIVISION, the band featuring members of D.R.I., DEAD HORSE and VERBAL ABUSE. Tony wrote lyrics to, and sang, one song and added backing vocals to many of the other tunes on the CD, which was recorded in Austin, Texas.