Godz Ov War Productions announced:
With great satisfaction, we would like to inform you that on the occasion of the 20th anniversary of Pandemonium’s existence, the most cult material of this group titled “Devilri” has been reedited in the commendable vinyl version. 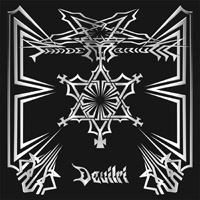 We would also like to remind you that the material is released in the limited number of 500 copies. One half of the entire edition was pressed on black vinyl, and the other white. The 12’ record packaged in an untypical black-and-white envelope, solid, hand-numbered jacket and equipped with a special full-format twelve-pages booklet with lots of archival and unique materials concerning Pandemonium from the early `90’s. As a bonus, an exclusive digipack of “Promo 2010” has been enclosed to all copies. It contains the unofficial versions of two new compositions by Pandemonium (“Black Forest” and “God Delusion”) from the upcoming album “Misanthropy”. Additionally, you can find on it a video with excerpts from the gigs of two of the last year’s festivals and concert video for “Frost.”
For more information write to Godz Ov War Productions: [email protected]