Neil Turbin has posted the following statement on his Facebook page regarding his early departure from the ONSLAUGHT tour:
“I agreed to do the ONSLAUGHT tour to fill-in for Sy Keeler who couldn’t do the tour due to his son’s illness. I turned down the offer three times because it was very low. I agreed after Nige Rockett wouldn’t let it go and kept after me and increased it slightly.
“The contract was signed a month before the tour and that’s the amount of time I had to learn an entire set of complex lyrics and vocals. There was no time on the road, except for poor situp sleeping in the van and numerous nights without hotel rooms, driving straight from gig to gig. That being said, upfront it was shared with Nige that the only way I could sing the proper lyrics would be with some help, since we never rehearsed once and four weeks was not enough time to learn the amount of lyrics.
“On Monday before showtime in Anaheim, I had a meeting with Nige and let him know I needed to be paid each of the last three shows the money that was owed to me which was a few hundred dollars, so he did not confirm or assure me that I would be paid and it was suspect the fact that he collected all the money from the Brazilian tour dates, even thought the tour cancelled.
“In Montreal before we played there were major arguments by some of the other members, with Nige expressing concern that they weren’t being paid. With this concern heavily in mind, I asked Nige Rockett, who told me he needs to get paid $2000 by [tour manager] Nate. I then spoke with Nate Klug, tour manager, who said that all the money is going to the van and said Nige was supposed to pay me. When Nige didn’t on Monday night after the Anaheim show, I then told Nige and the band C-ya. No Pay No Way No Show! Therefore his interview providing false information about what happened is just damage control.
“I left the tour on Monday by my own accord of not being paid for the final week of the tour. Nige Rockett stating that I was fired because of a teleprompter is total rubbish. I would like to add that whatever they pay Sy Keeler should be increased to double the amount to tolerate the verbal abusiveness and passive aggressive behavior of Mr. Rockett.
“I quit the ONSLAUGHT tour due to non-payment. Nige had no intention of good faith and no intention of paying me. That is the only reason I am not playing the last shows. The rest is Nige Rockett damage control and anger venting. His threat to me was, ‘See you on Blabbermouth.’ It is a shame that he has resorted to lying to the media. I could say a lot more if necessary but I’ll stop here now.”
**UPDATE #2**: Nike Rockett has posted the following response to Turbin’s version of what happened to cause ONSLAUGHT and the singer to part ways:
“Neil, I suggest you remove your totally slanderous post with immediate effect or you will be hearing from our lawyers forthwith..!! ONSLAUGHT will make a true and very detailed statement regarding your departure in due course..!”
Nige added in a separate post: “Further to my recent post, Mr. Turbin was paid in full each week as per contract. If he states otherwise, we have evidence to confirm each of these payments. In fact, Turbin was paid over 300% in excess of what any other ONSLAUGHT band member was paid per week..! So no, Neil was not ripped off, Neil was not done wrong, Neil got paid….!! Ask him to deny what I say..!!”
After Turbin apparently deleted Rockett’s posts from Neil’s Facebook page, Rockett wrote: “Why you deleting my posts Turbin, afraid of the truth..???”
The original article follows below.
British thrashers ONSLAUGHT have “fired” Neil Turbin as the lead singer for their ongoing “Thrash Invasion Tour 2014”, explaining that the former ANTHRAX frontman never learned their material properly.
Turbin was hired to front ONSLAUGHT as the fill-in for the band’s regular vocalist, Sy Keeler, who is sitting out the trek due to health issues with his son.
Speaking to Heavy Metal Television VJ Susie Von Slaughter prior to the band’s November 25 performance in Tempe, Arizona, ONSLAUGHT guitarist Nige Rockett said (see video below): “Basically, the [North American] tour was booked April/May time. Sy’s [son] has not been that well for a long time. We looked at it and we said, ‘Well, let’s soldier on and see what we can do.’ And we ended up getting up getting the singer from the first ANTHRAX album, Neil Turbin, to do the vocals on the tour. But I’m just about to tell you something very exclusive to you. We actually fired him yesterday [after the show in Anaheim, California]… Basically, I’m gonna be doing some vocals tonight.”
He continued: “Things never really started off well with Neil. He had a reasonable amount of time to learn the songs. He turned up at the first show in New York with a prompter on stage, and that prompter was still there yesterday. So tonight I will be doing my best to deliver [the lead vocals].”
Nige added: “The show goes on. I mean, we’ve done it with this tour, and we’re not gonna skip out on the last two shows. I mean, we’ve just gotta do it.”

Per Ohlin’s Suicide or Murder? 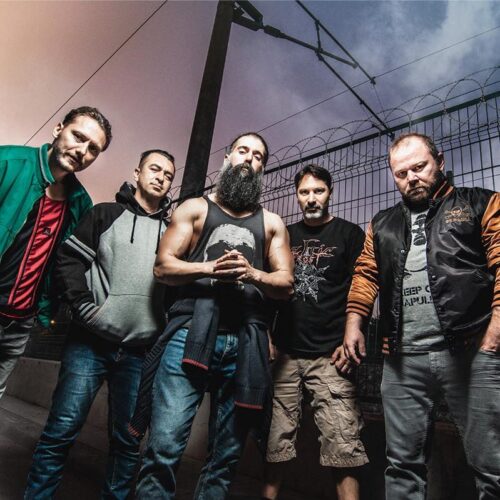