Onicectomy are brutal, brutal, brutal Italian Death Metal that worships at the altar of Cannibal Corpse and a few other gnarly influences. The guys in the band study everything from medicine to computers, play gigs and record demos, all the while entertaining interviews such as this one. The reader is advised to put don surgical apparel because, promise, there’s gonna be blood spatter as Brutal John performs his own Onicectomy below.

Hello Onicectomy, I hope you haven’t been waiting too long for this interview. Anyway, how are things going for the band? Played any shows recently? Got interesting live experiences to share?
Hi Miguel, this is Brutal John from Onicectomy. Don’t worry; it’s an honour and a pleasure for us to answer these questions. I can say that things are going quite well for the band. Before the New Year we had a mini-tour here in Italy with one of the most promising bands in the Italian underground scene, Tools of Torture. We still can’t stop thanking them for the amazing time we had on the road. Now we are writing new material and are waiting for a good label interested in promoting our music(k).

You play gruesome, no-frills Death Metal. Has this always been how you wanted to sound?
John: Oh yes! We like extreme raw Death Metal without any “technical” influences. As you can hear, our influences are Cannibal Corpse, Suffocation, Dying Fetus, Abominable Putridity, and Lividity, so we couldn’t play frills Death Metal.

When I first got in touch with you, the first bit of trivia I learned about the band was Onicectomy is composed of ex-Bleeding Shrine members. Tell us about Bleeding Shrine. What happened?
Bleeding Shrine was just a raw initial project. It was formed by Valerio (our current guitarist) and I with one of my best friends, Marco (ex-Engorgement In Veins, Vulvectomy). Our music was a mix between raw/extreme Thrash (like early Slayer) with guttural growls used as vocal lines. We had some line-up problems and since our musical influences were changing we decided to stop Bleeding Shrine and give birth to another project: Onicectomy 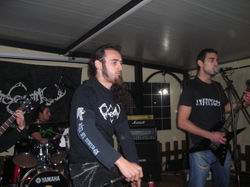 Your last release was 2007’s “Psychic Sadistic Dismember.” When’s the next Onicectomy coming out? Are there plans to release a full length soon?
Actually our last release wasn’t in 2007 because last autumn we entered the recording studio and recorded a six-track mini CD and we’re still distributing copies of it to the big international labels. As soon as someone is interested in promoting us it will be released. Our mini CD will be named “Maniacal Epidemy.” As you can imagine the concept that we have created for this work concerns mental illness and all its consequences on human behaviour. Our guitarist, Valerio, is already working on the cover artwork. In the meantime we are also writing new material (as I said before) so in case a label would be interested in producing our first full length, we will be able to release it within a very short time.

How did you find the recording process for “Psychic Sadistic Dismemberment”? Did you discover the wonders of a music studio?
That was a very bad recording session. It was recorded with our previous line-up and we had only played together for a very short span of time. It wasn’t recorded in a studio but in our rehearsal room by fusing together analogue and digital technologies. On the other hand, our newer work was recorded at Sound Cube Studio with the help of the great Antonio Tafaro. We worked together for almost one week and he has done a very good job and we would like to thank him for his experience and his patience.

Have you approached any labels lately? Are the connections with distros and small-time labels already in place to spread Onicectomy’s music?
We have approached some labels, and we are still in contact with a lot of them. We are just waiting for a good contract. We still haven’t sent any of our material to any distros because we are waiting for the label first. By the way, we have an extract of our next work called “Promo 2008” that contains three tracks from our next mini-CD. It contains a new song that was independently recorded and two tracks from our 2007 release. If anyone is interested in it they can contact us via [email protected] or on our myspace page, www.myspage.com/onicectomy.

Do you think you already possess the music business know-how that will bring Onicectomy to a broader audience?
It’s hard to confirm whether we do. As I have said we’ve kept in touch with a lot of international labels, so we wish that very soon our music could be brought abroad. If you mean in the live setting and activity abroad I can say that maybe it’s a little early: we have to spread our music and then aspire to play some gigs abroad.

Who are the band’s main songwriters and composers?
The songs are mostly written by our guitarist Valerio. He writes the guitar riffs first and then I find the drum pattern. The others usually add their parts immediately later.

Where do they get their inspiration? And what happens when the members of the band don’t agree with any particular piece of Onicectomy music? How do you resolve your differences?
As I mentioned earlier, our influences comes from all those bands who have written the chapters of Death Metal’s history. Besides, we are also fans of other bands who have influenced the international Death Metal scene such as Abominable Putridity, Devourment, Lividity, Dying Fetus, Skinless and many others.
Now if someone doesn’t agree we try to find the right way to solve our problems. We all want the best for our music, so we usually try to reach an agreement quickly whenever we’re stumped. Every idea is important in the song writing process! 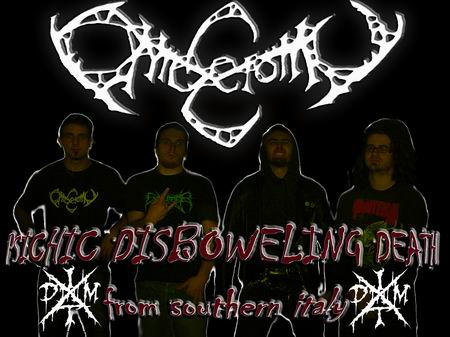 Can you handle negative criticism? Especially criticism directed at your music?
Yes, I can. First of all, we have to grow with the song writing; we need to write more articulate riffs. I think that step-by-step we are finding our own musical personality but we have to work to make it better.

How many concerts did you attend last 2008? Any memorable ones from your favorite bands?
Onicectomy was born last March so we haven’t done many gigs. Last year we had seven shows. Undoubtedly the best one was the last show on our “Spreading Infective Brutality Minitour 2008,” where we played at Frosinone with Tools Of Torture and Menarca. It was a very devastating night. We had a lot of fun and we hope that the audience enjoyed it too.

Where do the metalheads in your area usually hangout?
Metalheads in our area are close to the underground scene, but a lot of other things could be done to let the underground spread. We have some places that usually organize gigs, and especially the last time, several great bands from the international metal scene have had gigs in this area. 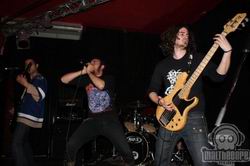 Alright, let’s make this fun. I’ll mention a band and you leave a short comment about them. It’s up to you whether it’s positive or negative. Ready?
Six Feet Under.
I have never listened to a complete song. I don’t like them. In my opinion they haven’t done anything to improve the genre. I think that Chris Barnes made the biggest mistake in Death Metal’s history by leaving Cannibal Corpse to found them.

Nile.
One of the most extreme bands I ever heard in the last 10 years. I like the way they play death metal, the atmosphere they can mix with abominable quantity of violence. My favourite albums are “Annihilation of the Wicked” and “In Their Darkened Shrines.”

Carcass.
A band who have helped the metal scene in becoming what it is now. When they started there weren’t a lot of death metal bands so their influence has been very important for the metal scene.

Vader.
One of the first European bands to play Death Metal overseas. I’d like to see them live.

Kreator.
I’ve never been interested in their music so I can say nothing. Sorry.

Onicectomy.
A Death Metal band that does not know the meaning of compromise. They play what they like to play and hope that someone appreciates their way of playing Death Metal.

www.metal-archives.com (wink,wink). A very good website. I’ve discovered a lot bands here thanks to their profiles. I’ve also come to know a lot of skilled people like you.

Elven King.
Who? I never even listened to a single riff of theirs.

Opeth.
A band who likes to let Death Metal become commercial. I don’t consider them a Death Metal band. I never really dug the kind of music they play.

Giorgio Armani.
Certainly someone who has nothing to do or say to any scene.

The Gods of Metal festival.
A festival that has grown to monopolise Italian metal gigs. Fortunately, we also have other festivals like the Tattoo Death Fest where it’s possible to see only true Death Metal bands. I hate it when Death Metal shows are preceded or followed by other kinds of shows from different genres. I’m a supporter of only Death Metal festivals.

Okay, we’re done. Is this interview keeping you from doing something more productive?
Yes, tomorrow I have an exam but I don’t care. I’m enjoying answering these questions..

What do you do for a living? Are you still in school?
We are all university students. I’m studying to become a Veterinarian, Valerio and Savino study at the fine arts academy and Klaudio studies Information Technology. Obviously we also keep part time jobs just to have some money in our pockets.

My medical vocabulary fails me. What’s an Onicectomy?
It’s a long story, but here it goes: Onicectomy isn’t really an English word. It is our English translation for the Italian word “onicectomia,” which is a surgical operation done to extract embedded nails from toes. Valerio and I have suffered from this condition and we have both undergone the same operation, so we have decided to translate this experience into our band name.

You know we both don’t have all the time in the world so how about you finish this interview with a short message? Hope you had fun though. And thanks.
First of all I want to thank you for the interest you have shown our band and everybody who read this interview. I’m not a poet so I don’t know any smart, poetic sentences to greet you with. But I can just invite all of you to support the underground scene forever because we believe in our music and we all know how much sacrifices everyone of us has to make to contribute to the scene.