This interview with Spanish thrash metal maniacs “Omission” ,thats a nice interview indeed with their guitarist Marco,thanks for quick answers…

Greetings and welcome to Extreminal Webzine.As a starter – present your band to those of our readers who still don’t know who you are ?O-mission is the name of your band, what’s that exactly mean and is there some story behind it?
Hailz!!! We are a Satanic Speed Thrash Metal band from Madrid formed from the ashes of old speed metal band Muro, we picked our name after the Testament song Sins of Omission. 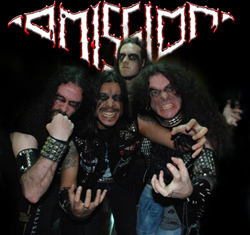 OMISSION was created in 2002 but your debut CD “Thrash Metal is Violence” came out in 2009.What took you so long to release your first full-length ? You define yourself as a “Satanic Speed Thrash Metal” band and you mostly have oldschool thrash and black metal fans. Did you have difficulties to find supporters in your own country?
We want to hoop step by step, first we recorded 3 demos with a shity sound, we couldn’t sell that crap so we uploaded all of them for free, than we released a split live vinyl with teutonic OLD, after that people were asking for a new cd, we said fuck you, recorded a bunch of old songs from the demos with a better sound plus a new track and released Thrash Metal is Violence, we released 500 copies by ouserlves, people liked it and Xtreemmusic reissued the record with 2 bonus live tracks, in Spain we have a good legion of friends in our gigs, we cannot complain.

What is the difference between your second album “Merciless Jaws From Hell” and the first CD ? You mostly use band pictures as album covers, don’t you like drawn covers? And what was the purpose of using a picture of a “naked woman” on your last album cover?
An old fetish?hahahaha, of course we like drawings most of our favorite bands have them and we will have it in the future, but for no special reason those 2 covers are photos…shit happens hahaha. 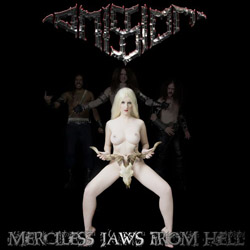 You are working with Dave Rotten’s Xtreem Music label.Are you completely satisfied by your mutual work and what do you think of his premier band AVULSED ?
Well you can never be 100% satisfied but Rotten does his work we do ours, for now he presented Omission to the world which is something that we have to thank him, about Avulsed bastads we are big enemies, so big that Ricky recorded our second album hahaha, they are great people, we know the guys for so long…Avulsed, perseverance is what Avulsed is all about.

Do you play live often and will you share some crazy stories from your concerts ?I saw some flyers on your page ,any new concerts recently coming on ?
We don’t play a lot basically because we don’t pay to play, our lead guitar (ME) lives in Lisbon and the rest of the band in Madrid, but lately we play like once or twice a month, weekend fests mostly, which is good to drink a lot smoke some drugs and meet people.About crazy stories, the good ones i’ll keep for us, a bad one was that Marco couldn’t catch a flight for a gig and we had to play like a power hell trio.New gigs will be next week in Madrid with Fuckoff than a bit all over spain until march. 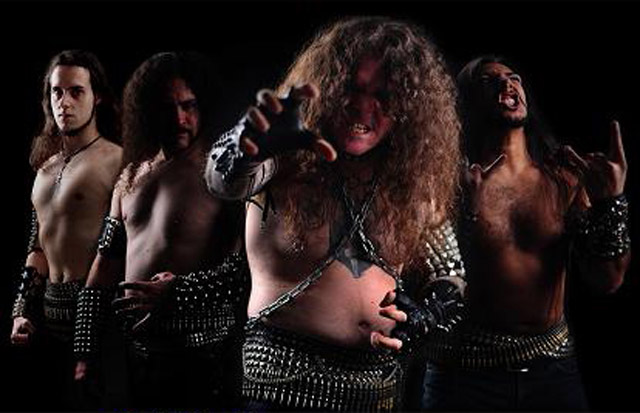 How do you see the metal scene in Spain ? Are there many metal fans ? Are there good venues and concerts ?I discovered very good bands from Spain and what do you think of young and old generation in Metal scene in Spain ?
About the Spanish Metal scene is good, we have labels, bars, festivals, many bands, but the question is, are there many underground fans? the answer is no but we just don’t care we will follow our path, the left one, fuck people that only likes mainstream.

What do you think about the current economical situation in Spain ? Which one is the reason for the severe financial crisis in the southern and eastern parts of Europe ?
We spent more money that we should?hahahaha, without doing that Germany wouldn’t be so strong we spent the money in german companies and business…now that they sold everything to us they want the interests…evil business, love it hahahahaha.

Who are the bands/musicians who have inspired you to start playing music and still influence you today ?
NWOBHM, Venom, Bathory Destruction, Kreator, Celtic Frost, Sodom, Metallica, Slayer…etc. 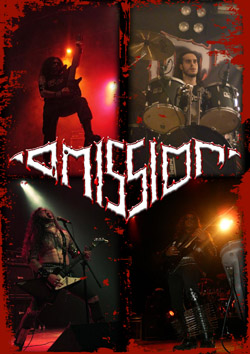 Which one was the very first and what’s the last album you (have) bought?
My first record was Megadeth-Peace sells but whos buying, stole it from some guy in school, the last one i didn’t bought it ,it was given to me because I recorded all the solos, is the last Decayed one Lusitanian Black Fucking Metal, Patillas the singer and only composer has like 2000 vinly cannot tell you the first and the last one sorry hahaha.

What do you think is the reason in the growing interest in oldschool thrash metal ? Do you like any new thrash bands ? Do you think is it new trend ?
I don’t like the new sound from the new bands, Thrash Metal bands sounding like the Bay area sound all the same, on the other side you have bands like Midnight, Witchburner, Ketzer, Redimoni,Nocturnal, Altar of Sin, they sound evil, if i like new bands, only a few, and they are not so new.The trend already’s gone, so now we will see what happens to all of those new bands with amazing mastered sound…

We are in the end of 2011.Which one was the best and which one the worst metal album for this year ?
I love the last ACCEPT, it KILLS!!! but I think is from 2010 the last OVERKILL album.

Your final words to our readers ?
Thnxs for this opportunity to spread our music and our name, just be prepared for the new Omission album, it’s already composed, we will record it next easter with the help of the cruxified one and released next september, if you are a festival promoter just shout, opss, we want to release Merciless Jaws from Hell in vinyl, if anyone interested…
HAILZ!!!