POWER CUP
TURN ON YOUR POWER TOOLS FOR GRINDING RENOVATIONS! POWERCUP!!!
These raw mince-grinding maniacs will give you a lesson in renovation through fucking noisy & dirty chugging powerviolence fueled with plenty of gurgling low end, played on a circular jigsaws and powered by an outside diesel generators. Grab your tool box, put on your tool belts & be part of the grinding cult of power tools & home renovation.
NAPALM RAID
LOUD AS FUCK CRUST-PUNK/D-BEAT FURY FROM HALIFAX!!! NAPALM RAID!!!
This blazing crust trio will blow your fucking face off with some of the most aggressive d-beat Canada has to offer. Drawing a heavy influence from DOOM & the UK Hardcore scene of that time, NAPALM RAID deliver some of the most energetic gigs filled with tortured vocals, heavy riffs & raging solos in short sharp shocks that any punk can appreciate. Don’t miss this!!!
HOMALKA
HIDE YOUR KIDS! HIDE YOUR WIVES! HOMOLKA IS COMING!!!
The twisted & deviant noise/powerviolence machine HOMOLKA is here to terrorize your childhood dreams. Depraved as it sounds, the band name is based on a famous canadian serial killer. Coming from Toronto, this newcomer band will rape, torture & murder your eardrums while burying them under punishing grindcore madness.
BROKEN HOPE
DEATH METAL PLAGUE SPREADING TO MONTREAL – BROKEN HOPE!!!
A putrid blast of air means that a nightmare burried a long time ago is coming near, black plague that has been recalled to life in the swamp of eternally decaying guts. Yes, merciless, heavyweight machine called Broken Hope from Illinois is rushing to grind your brains. Hibernated for a long time they are back with a new record Omen of Disease, organic brutal death metal mixed with a fair portion of sickness that is even more destroying than on their great album Loathing or extremely raw debut Swamped in Gore from 1991. And these are the albums that have become unquestionably the classics of brutal death metal genre.
So be looking forward to this mutated monster to smash not only your ear canals and to fucking kick your ass but also to open a new dimension of fear and perversity in your mind as a bonus. Do not forget all your hopes will be drowned in the mud of Montreal at OEF AMERICA 2015!!!
GROTESQUE ORGAN DEFILEMENT
GORE FOREVER, MISOGYNY NEVER!!! GROTESQUE ORGAN DEFILEMENT!!!
Thick and nasty goregrind extravanganza is awaiting you! G.O.D. play grindgore thorougly entrenched in the old school way. Capitalism, colonialism, white supremacy and patriarchy are vomited upon via a three way vocal attack while a fury of face-ripping riffs and genuine blastbeat obliteration ferocely destroy your skulls. Gore forever!!!
TOTAL FUCKING DESTRUCTION
3 words!!! TOTAL FUCKING DESTRUCTION!!!!
What better band describes more Obscene Extreme America than these fuckers?! Bringing their blend of catchy & weird-as-hell grindcore to Canada, the trio of TOTAL FUCKING DESTRUCTION will leave no one indifferent.
You know what to expect: Unorthodox song structures, killer riffs, multi-vocals attack , pounding drums & craziness a go-go! Get ready to be part of the annihilation of Montreal!!!
RUMPELSTILTSKIN GRINDER
BONE-CRUSHING, GRAVEYARD STOMPING PHILLY THRASH ATTACK!!! RUMPELSTILTSKIN GRINDER!!!
Don’t get fooled by the name, RUMPELSTILTSKIN GRINDER are neither the stuff of fairy tales nor in fact a grindcore project, but a band focused on the current thrash revival mixing aggressive vocals, sick ass punked-up riffs with an old-school death metal feel.
These thrash maniacs better pay tribute to Canada by playing songs from their first live album, Raped by Bears! One sure thing, Living for death, destroying the rest is what defines this evil crossover assault and you better get your ass there to witness this madness.
JIG-AI
LET’S FUCKING PARTY WITH CZECH GRIND COMMANDO!!! JIG-AI!!!
Fuck yes!!! Did you really think Obscene Extreme was coming all over the way from Czech Republic to Montreal without bringing at least one of their motherland grind heroes?! You guys better pay tribute to the band by getting demented in the pit, wearing your crazy costume & stagediving like there’s no tomorrow. Hell, bring a fucking beach ball. Let show those Europeans bastards how insane we can get over here. 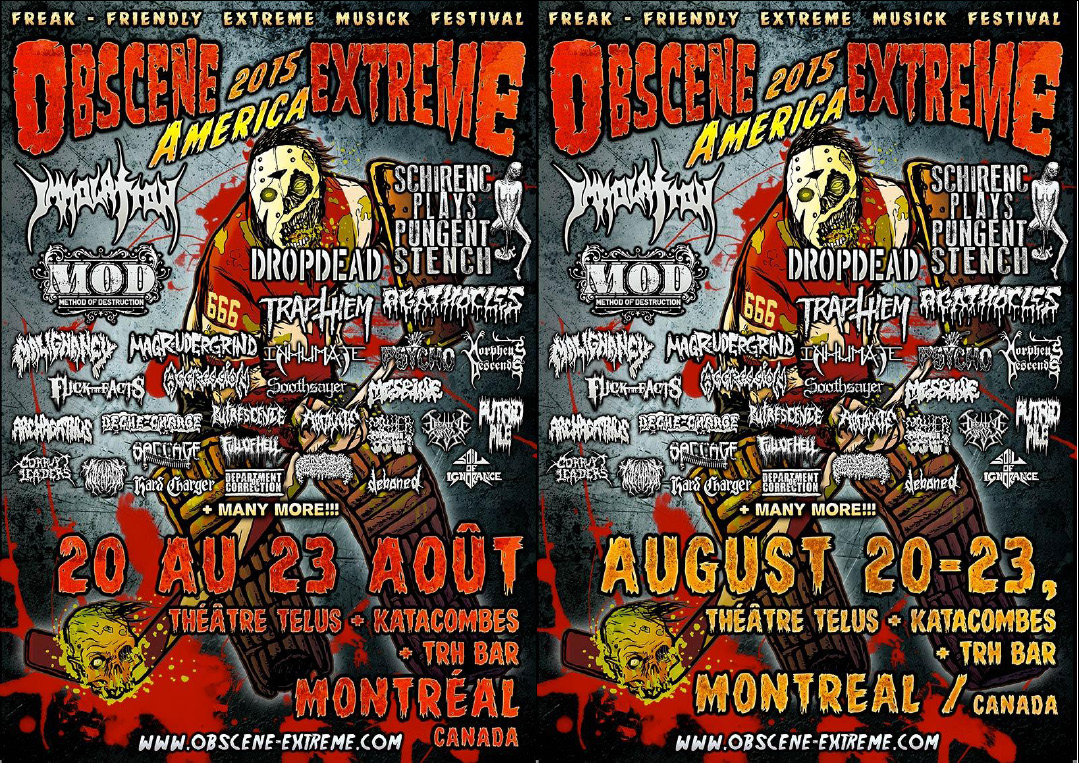