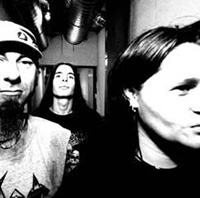 Dutch thrash metallers NUESTROS DERECHOS are currently recording their first full-length album at Bunt’s Studios in Utrecht, The Netherlands. The band has already finished the drum parts for all 12 tracks and is now recording guitars, bass and vocals. Mixing will be done in August. The upcoming album, yet untitled, is slated for a release later this year.
NUESTROS DERECHOS have posted the first studio pics on facebook…