How is going your life?
S.P.Slaughter: My life is going good i guess.

Can you tell me some your band for reader?
S.P. Slaughter: Nihilatör started out in early 2012 as nihilea where i wanted to do a raw noise d-beat band with the singer of a crust band called “Welk”. If you want to
know what inspired us listen to french “electric funeral” oder japanese “d-clone”. these bands gave us the idea to start a similar band. So i recorded the first demo
all on my own in the bedroom of my parents house. except for vocals. but after half a year the singer still didnt find the time to record them and i got to know monty
at an entombed show. we decided he would record vocals in mid 2012. we then continued as the two of us. by the end of 2012 we decided we wanted to play live
so we asked the schallmauer and d.h. power to help us out and we became a more hellhammer/discharge inspired band and recorded our second demo “nekro punk motherfucker” in mid 2013. the last change was to part with the schallmauer and i changed from drums to bass and now Prince blast phenom of sanity play drums. 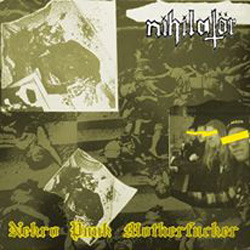 Firstly there are only two demos so,when do you think to release albums?
S.P. Slaughter: We just recorded another release. we moved further towards metal this time and you can definetely hear more celtic frost, motörhead, entombed and darkthrone in our sound. this will be released through “fuck the mainstream, this is the mainstream records”, check them out its a great metalpunk mailorder. so yeah
you could call this one an album if you want. it will be called “satanic redneck snuffilm sect”.
Major Monty: I guess if a label would contact us, to release an album we would and could. since max (S.P. Slaughter) writes new material almost all the time.

What can you tell me about punk culture?
S.P. Slaughter: Nothing.
Major Monty: If you see the microcosms of the shows we play on as a part of the punk culture, i guess it’s pretty cool and working good. but of course people always have
different understandings of what “punk culture” is and should be and we as a band don’t necessarily agree with every of these approaches. live free Who is favorite punk-hardcore-metal bands?
S.P. Slaughter: Well my favourtie punk band is probably the ramones or maybe GG Allin, my favourite hardcore band is the french band kickback, singer is the most pissed off dude ever. and my favourite metal band is really hard to say. i love hellhammer, early exodus, celtic frost, motörhead. you could say those are my favourites.
Major Monty: I have to mention GG Allin and Darkthrone, cause these are the things that influenced me in every musical project i ever was a part of. I have to mention the local band Asbestos in Osbestrics cause they changed my whole view on what hardcore punk is and can be and basically changed my musical understanding completely. One of my fave bands ever have to be the ALMIGHTY Plasmatics, Wendy O. Williams is such a positive inspiration.

What does punk music for you?
S.P.Slaughter: Well punk can be different kinds of stuff, classic stuff sets me in a good party mood! it makes me happy
Monty: Punk Music is a great let out for all the things you see or have to go through in your everyday life.

Generally,what is mean theme songs?
Major Monty: We never really had one theme i guess, i just write about what comes to my mind and fits the music..in the past and i guess the future this will deal with serial killers, alcohol, wrestlers and tons of MetalPunk related nonsense. But you could say there is an occult, redneck, primitive satanism theme on the upcoming tape. What are you expectations with your band in the future?
S.P.Slaughter: As i moved to düsseldorf and prince blast phenom of sanity moved to osnabrück noone of us lives in münster anymore now, where we started out and where our rehearsel room is. it has become extremely hard to find time to practice and sit down and get to play new songs and so on so we decided we want to play
less shows in the future. but we’re still there and active. we’re preparing the new album to be released at the moment!
Major Monty: Play, record, meet cool people.

What kind of world would you like to live?
S.P.Slaughter: A world where everyone realises pacifism is the way to go instead of being a dick. maybe a world where anarchism is possible and you’re not obliged to someone elses will.
Monty: I guess i can only support max here.

What do you think about german politic system?
S.P.Slaughter: Well i myself am not the biggest fan of capitalism so i dont really think the german system is a system of equality and that sucks
Monty: and here.

What do you think about education system in your country?
S.P.Slaughter: Well i’m not really an expert but i guess certain people have more possibilities than others in this domain too, which is shit. and also i learned
so many stuff at school that i wont ever need again, that was kind of annoying haha. why dont they teach interesting new ideas instead of just
telling you how the world works at the moment?
Major Monty: As a kindergardener i have mixed emotions about this. besides what max said, that not everybody has the same possibilities, your parents also have to have
kind of a plan going for you. cause if they don’t give a shit what you learn or what institution would be fitting for you to begin with, you can have all the possibilities you want and still end up without anything usable. anything further would basically bore the shit out of everyone here…

Thanks for hooking us up, good luck with your sign, cheers.