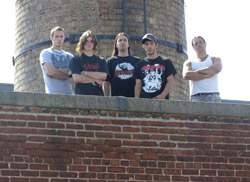 Hi! What`s up? I would like to congratulate the great new album! There are really killer tunes. What should we do to kill as great as you? 🙂
Eric : Play for fun ! Don’t play because you want to be the flavor of the month…play what you really like and don’t care about critics.

It is your first album, but you had 5 songs promo earlier. Are there different songs? What could you tell about this stuff and comparing it with your full-lenght?
Yan : The promo is actually 5 songs from the ‘‘Enough for Dementia’’ sessions. We made a 3’’ promo cd with those songs to show people what we’re all about. And the answer and enthusiasm was pretty overwhelming…

You’re mixing many different genres together – does this reflect your personal taste? What do you think, are your nearer to brutal death metal or grindcore?
Yan : We’re all listening to different kinds of ‘‘Extreme music’’ in the band so it may shurely reflect in the final result of our music. For the Death Metal vs Grindcore I couldn’t say exactly but it’s like a good receipe. We must dose both meticulously in our songs in order to get it sounds right. 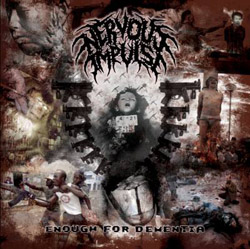 I hear you like use some melodic elements like in "The Bells Of Immortality". What about the role of melodic elements in your music? Is it needed and why?
Yan : It’s like a breath of air you know? We all enjoy the constent agression but sometimes it takes a key part in the song wich helps you enjoy the next brutal riff. Vincent is the master of those melodies and technical riffing in the band.

Big role in Nervous Impulse are great, inhuman and various vocals. Is it difficult to exercised these types of vocals? Which are the most difficult? Who are your masters of death metal/grindcore vocals?
Eric: Well my friends, I got no merit at all, I am born with that ability to sound like an animal. It’s hard to explain but, it’s like the sounds of my farts…I dont choose the way I sound lol ! On a serious note I am in a very good cardio vascular shape. One person in millions born with a vocals system like mine, im just the lucky winner.

What’re your personal favourite tracks from the album and why? Are you listening your album often?
Yan : I would pesonally say Dead Jeremians because I’m a fan of mosh and stump beats that makes you feel like you’re about to fight a tree in your backyard. 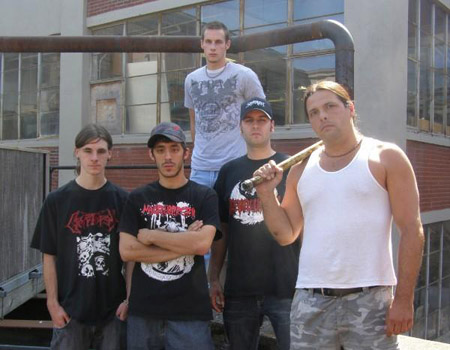 Why did you release your album by D.I.Y.? I think you would find a good label with your amazing music…
Yan : We’re still searching for a descent label to re-release this cd + A bunch of new tracks. We’ve got 5 new songs ready to go so far…

Are you played in Empathy Denied, Obscene Crisis, Enraged yet? What could you tell about situations of those bands.
Eric: All these band are far behind me. I gave my 100 % to these formation and I’ve got no regret at all. I gave my best to them and had fun with all these formations and wish my best to all of them especially to my good friend Steven Henry and Empathy Denied. Obscene Crisis is dead since 2001. 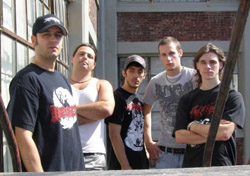 On your myspace profile we see "Nervous Impulse 100% Pure Hate". What do you hate the most? How big role in your music is hate? Could I say your music is very emotional?
Eric: We are socially engaged! We talk only about real things of life from the human point of view. Life sucks at so many levels and my generation is getting older and we’re still facing the same issue…but nothing changes …lots of frustration

Lyrically what kind of subjects do you write about? Is it probably treated about social and inspirated by life things, am I right?
Eric: Exactly! You nailed it! I try to go in deep on human tragedy and on the real individual point of view. On the lyrics side, we are totally and 100 % grindcore/hardcore. We don’t do it like a guru or a preacher who want people to think like us (…) too many peoples want that. They told you what to do and what to think, how to dress etc. I just relate to life with his sad reality and his joy, no pink glasses here.

You tell in some of interviews that "Dead Jeremians" is inspirated by the interesting story from your life. Could you tell this story for our readers? Are there any songs inspirated by similar stories?
Eric : I’m an older guy (soon 39) and I’m a social worker and the Dead Jeremians song is about a true story. I used to be co-director of a youth centre called ’’House of Jeremy’’. It was a rehab centre with a human approach for people with drugs and behavioural problems. One day, the government cut our funds, closed the centre and take 35 teenagers and dropped them on the streets with a bus ticket as the end of their therapy. Many committed suicide and went down as homeless people. Government sacrificed these kids for budgetary consideration but acted with no regard to human life. It’s like a scar on my mind. I would never forgive the government for that, never! 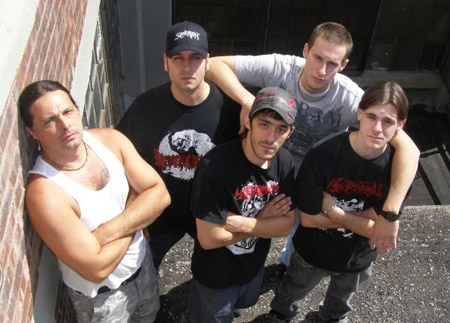 What could you tell about your shows? How many have you played? How could you describe your performance? For what do you put weight the most?
Eric : We dont play often, so far we’ve played once at the Rimouski last december. The public was with us at 200 %. You can get a few part on youtube if you want a peak ! We’re planing to play more on spring and summer because of our busy schedule(all working and familly). We rather play less often than over feed up the fans by playing too much.

What do you think about the new school death metal/deathcore bands from your country like a Beneath The Massacre or Despised Icon? Do you listen the modern styles of brutal music?
Yan : Some of us listen to those bands and we respect their work but we don’t base our songwriting to fit this wave of metal. Nervous Impulse is more into raw straight to the point brutality. 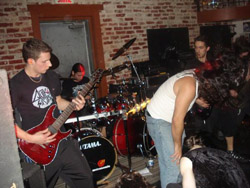 Are you broke down of the fail of your hockey team in Olympic Games haha? What about the reaction of people in your country?
Yan : Hey !! They won gold actually !!! As you could see on TV Canada is pretty proud of it’s national sport. It went pretty insane but here in Montreal the craziest reaction is when our local Hockey team (Canadiens)wins the Stanley Cup. You’re better lock your home’s door because there’s riots and everything… a bit like soccer for europeans …

Are you interested in this sport? Are you playing? Why does hockey is the most popular sport in Canada?
Eric : Hockey is not a sport…it’s a religion here. Like football/soccer in Europe and South America…

Do you know any Polish bands, zines etc.? Are you interested in European scenes? When could we expect your european tour?:)
Yan : Vader, Decapitated and Behemoth totally kills !!! We would shurely do a fest or a couple of european dates if a promoter presents something serious to us.

Thanx for your time. Anything you’d like to add to conclude this interview?
Thanks to everybody who take a few minutes to listen to our music!
Our ‘‘Enough for Dementia’’ cd is available through us for 10$ postpaid.
Go visit our www.myspace.com/nervousimpulse page or drop us a line at [email protected]