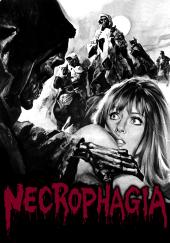 Songs definitely set to appear are as follows:
– Beast With Feral Claws
– Suffering Comes In Sixes
– Naturan Demonto
– Reborn Through Black Mass
– A Funeral For Solange
– Tomb With A View

A demo version of ‘Beast with Feral Claws’ will be world-premiered on the NECROPHAGIA MySpace page on Saturday, April 24