You had a band called Crucifix which was formed in 1994 and now Necrocult… You are in the extreme metal scene but you hadn’t released many records, could you tell us about the past of the band and what you have experienced?
Manu : As you mentioned, the band was born in 1994. David and Loran used to play trash metal classics covers then I joined with bass and voice, trying to play with them. From these sessions a first song was born, and another, and another… highly death metal influenced. Through those years the band evolved to something more and more brutal when in 97 i think Loran started singing with me, puting his black metal voice and touch in the music and entity. That was the debut of actual Necrocult. During all those time we recorded many rehearsals tape, for us only, and one live recording, the one and last under Crucifix name.
Loran : Crucifix then Necrocult is from the beginning more a live band than a studio one. We played live since 1994 and never stopped to spread our music on stage – except since these 3 last years. We recorded our first album after a meet with Ash from Ouroboros who proposed to record us. He released this album on his own label, Snakebite Production that is owned by his bro now.

You released an album in 2003 under Necrocult name. Then 8 years have passed and during 8 years you had some gigs although you don’t have a record for the band. Can you tell us about these shows? Did you had to take a break?
Manu : Those shows were particulary played in South of France. It was cool to present our Music to larger scene and audience. We have the opportunity to open for one of our favorite band Enslaved. We never take an official break, it’s just that first of all we are not the most productive band but we are still composing new songs. 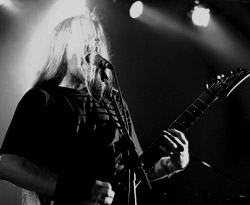 Loran : Since the released of the album, we had opportunity to play outside our region with great bands of the french underground scene. We played twice with legendary french heavy metal band Killers and really good bands that you need to listen (Asmodée, Malhkebre, Svart Crown, The Seven Gates, Withdrawn, …) And it was an honnor for us openning for Enslaved gig here in Toulouse. Necrocult never took a break. Involving his life in a band need time and for personal reason we can’t develop our music as we like.
David: The show in Macon with “The Seven Gates” was the best we ever proposed. Killer sound and public. Total chaos from the first riff to the last scream !

Manu also has a project named Oldskull and they released a record in 2009. Can you talk about that band?
Manu: Oldskull is an old trip, with an old friend to play total death metal, the one we enjoy, in the old way, as fans of bands like Unleashed, Morgoth, Bolt thrower, etc. Joined with a friend of us, then rejoined by my brother (who plays in TRASHNASTY too ,a great brutal thrash/death band). We already played some gigs and released one demo called “death and metal”

You mentioned that Necrocult is working on a new record. How is the recording going right now? How many songs will be, is the name decided etc, can you share the information with us?
Manu: The recording is right and very well started, soon finished. There will be 6 songs. Like in the “Necrocult” album, these six songs are quite long. They are the simple evolution of our music, created during these 8 years, darker and hatefull, still so epic and brutal as we enjoy to create. There is a title, you will soon discover it. 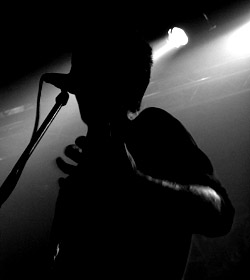 Loran: I’m recording and mixing this future album in my personal studio. We decided to record on this way because we want to have total control on the production. First materials were very promising. The album will be composed of 4 songs we already played in live and 2 very new compositions. We are starting to work on the cover and next step is to found a label for this album.
David: We decided to record only 4 songs first for a MCD. When we realized that the 2 lasts composed songs must be included in this recording as they considerably enhance atmosphere and personality, we decide to add new record session. As total duration is near 45 mn, the MCD project became an album project.

Considering the extreme metal scene from the past to day, what were the biggest changes in your opinion?
Loran: 15 years ago, you don’t need to add “extreme” when you were talking about metal or True when you’re talking about Black Metal. The big difference for me is that many band loosed the roots of our music and the original metal spirit.

Among the bands, themes like nationalism, racism etc are growing and new metal kinds like metalcore, deathcore etc have emerged. What do you think about these things?
Manu: I don’t think anythings of themes and styles you have mentioned because i’m not interested so there is nothing good nor bad i can think. There are surely nationalism in few black metal bands i listen so i only listen their music.
Loran: I hate nationalism, racism and these (always) trendy lyrics themes. Metal core, Death core are music with no interested for me as they are not handle traditional metal roots. 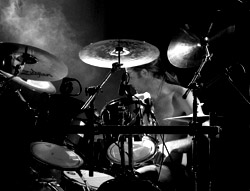 The number of the bands which have black/death mix brutal vocal and are black metal based has increased lately, do you think the trend is becoming the late 80s and early 90s?
Manu: The old school movement is cool for who can’t find pleasure in the actual metal. Personnaly there are not so much bands i enjoy that came since the 2000 because of the modern sound and influences.
Loran: It’s a good thing, actually trend is the oldschool way, from Heavy Thrash to Old School Death Metal. I think bands have lost the original metal way last years, it’s time to fight again with true old believe. Few bands offer new sound and atmosphere, dark and harmful – especially here in France in death and black metal.

It might be a cliche question but I will ask anyway. Have you ever thought about how an extreme metal band must be?
Manu: Extreme, Personal and Authentic
Loran: Evil and Occult.

Lastly, thank you for your answers. What do you want to say to the ones who will meet you with this interview and to the ones who wonder your band?
Be prepared for new chaos coming soon. Further material will follow and enhance our initial way. Follow us on official website on www.necrocult.com. Thank to you Cenk for your interest and for your work with Extreminal !