The official lyric video for the song “Through Treacherous Flames” from German extreme metallers NEAERA can be seen below.
The track comes off the band’s sixth full-length album, “Ours Is The Storm”, which will be releasd on March 1 in Germany, Austria and Switzerland, March 4 in the rest of Europe, and March 5 in North America via Metal Blade Records.
The CD was recorded at Alexander Dietz’s Chemical Burn studio in Bed Kosen, Germany. 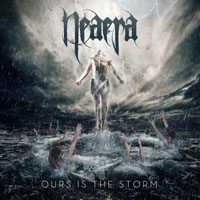