It was answered both by Wrath and Nadir! 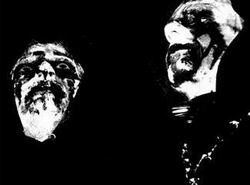 First of all,let’s begin to ask a question is that any interview you can regularly face.Please,may you give a brief bio of Nadiwrath’s past and present?
Hails Damnare! Nadiwrath is a hatefull, old school and underground black metal band that started spreading its’ cancer in the end of 2006 by Nadir (Guitars, Music) and Wrath (Vocals, Lyrics). After some changes in the line up, we recorded and released our first demo cd, “Nadiwrath”, that was limited in 300 copies, in the middle of 2007. Nadiwrath is a live band, full of hate and disgust towards every living thing. After a lot of live shows, we entered studio before three months in order to record our first full length album, that is going to be released by Moribund Records (hails mighty Odin) in the beginning of 2009. Nadiwrath consists of Wrath (Vocals, Lyrics), Nadir (Guitars, Music), Maelstrom (Drums) and Semjaza (Bass).

You are not an old band but if we check the band’s members past,we see that all members played in many bands.What’s the main point that all you gathered in this band?
Because Nadiwrath is the most alcoholic and old school band than the others!

Why Skullblaster left the band?Any serious problem you have had with him?
No particular problems. He just couldn’t follow the plans of the band. Each member of Nadiwrath must be dedicated 1000%. Maelstrom is our new drummer who is devoted to the horde.

You found a new drummer after he left.How you met with Yngve?
As we mentioned in the previous question, Maelstrom is our new drummer now, so there is no meaning in writing something about our past members. Skullblaster, Yngve and Sardonic left the band for their own reasons. There is no problem at all! Yngve just helped us with the recordings of our first demo cd, at a closing time, when Skullbalster left the band.

Your first demo was a self-titled record.May I ask why you did not give it a special name?Any reason for it?
For us Nadiwrath is a special name! If it wasn’t we wouldn’t use it all, even for the name of the band!

How you created and recorded this demo?Can you give us any info about background of this process?
After a lot of rehearsals and live shows we decided to record our first demo! We had to face a lot of problems, but in the end we survived and create this sick and perverted living hell. Sardonic and Skullblaster left the band in the middle of the recordings, so Nadir recorded the bass and Yngve the drums. So you can understand that we lost some considerable time.

Any genre,sub-genre or musical wave you are manipulated when you create the music?
Only alcohol and true uncompromising black metal art!

What do you think about nowadays black metal genre which impressed by different musical genres like fusion,electronic,jazz and you know list goes on?
There is nothing to be said! We care only about our band and nothing else! All the others can do whatever they want!

What are your thoughts and reactions about NSBM wave,especially from east europe?
Absolute nothing! We have no relation with it! No thoughts at all! 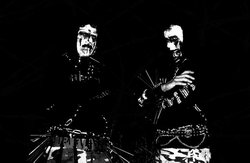 Just go on the questions about the band.After your demo was released,I heard that your bass player have had faced some psychological problems,what about him? he backed to band?
He returned only for a little while and then he left again, but this time for good!
We haven’t heard from him since!

What are the reactions and feedbacks you see about 2007’s demo from fans,freaks and press?
Great, we suppose!

Any special meaning of Nadiwrath name for you?
It comes from Nadir and Wrath (Nadiwrath)! Our darkest vision has a name and it comes from two underground souls!

Bands like Darkthrone,Carpathian Forest and Impalad Nazarene are very impressive for Nadiwrath as we can see.May you tell me your musical way and musical journey is goin’ on this way and genre?Or any different tunes and genres we should expect from you in future?
Whatever it happens Nadiwrath will always follow the path of true underground black metal, as the bands you have just mentioned have done all these years! No changes!

Your demo was sold out and it has re-released recently as I see,and you signed with Moribund Records.May you talk about this demo re-release,contract and sign?
Wolfsvuur Records re-released it in tape format limited in 166 hand numbered copies in the middle of 2008. Moribund Records is on of the most respectful label in black metal, so it was a truly honour for us in signing with such a devoted label!
Odin really like our philosophy, music and propaganda! So he offered as a very good deal with Moribund! Total respect to the cult and Odin!

A classic question…May I learn the bands which you supported in Greek market and genre?
Only the bands that the members of Nadiwrath involve with, such as Dodsferd, Grab, the mighty Neargal, Abyssgail, Cross Denied, Thy Darkened Shade!

Thanks for this interview. To the listeners and our readers,any last words you have ?
Black metal propaganda against all! Nothing else!

On Behalf of Nadiwrath,
Wrath and Nadir!