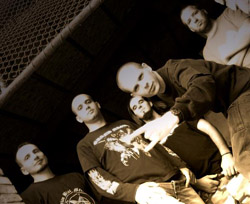 I first listened Nadir with a split album I don’t remember how I got called "Rebellion Is Comformity / Allschool Monster Is Coming", I’m looking at that cd now covered with paper and no booklet, both in this album and "Tenacity" album there is a rooster in the art cover, does it mean anthing special?
When we originally chose that rooster, we wanted to have an emblematic mascot for ourselves, a fixture in our album cover artworks such as Iron Maiden’s Eddie or Megadeth’s Vic Rattlehead. Otherwise, only the “Rebellion…” split had such a simplistic cover, all other Nadir album covers are professionally printed.

It is written 1993 on the art cover of “Rebellion Is Comformity / Allschool Monster Is Coming", when I first saw it I thought the songs were taken from an old demo, I was wrong, right?
Actually, part of the “Tenacity” CD is made of rerecorded stuff from our old releases. 1993 is the year when Nadir’s predecessor Dark Clouds has been formed. We changed the band name but the line-up (due to gradual but logical changes in the music) remained the same as Dark Clouds’s last line-up. So, the “Rebellion…” split was Nadir’s second release. That’s when we started to distribute our stuff for free. And CDs handed over for free or free downloads weren’t as widespread back then as they are nowadays.

There are effects of death metal and core on your sound, what kind of music do you listen, what or who affects the music you make?
Our music is a mixture of lots of different things. You can discover the influences of classic death mtal bands like Bolt Thrower but Crowbar or Earth Crisis have also affected our music a great deal. 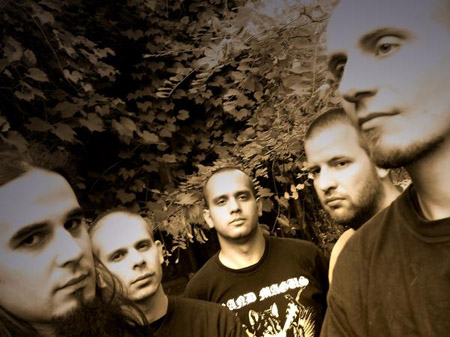 How is music scene in Hungary? Concerts, companies, bands…
Music scene is just like anything else in Hungary. If you are just a little bit more talented than the rest and you really want to achieve something the faceless masses of virtual nobodies will hold you back. As for live shows, more and more foreign acts come to play to Hungary but at the same time, local bands have less and less good opportunities to do shows. Companies? There is only one metal record label here. 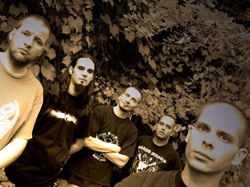 We can download your albums from your official band site but also you publish cds too, can you still sell your albums?
No, we don’t sell albums at the moment, we just hand out all the CDs we have for free. Who cares about money when you can’t make a living of this anyway. At least we don’t have to invest that much either… We can see clearly that the possibilities of a local underground band are limited so this is how we aim to reach as many people as possible.

I know you are pro-underground. You have 2 full-length albums but they didn’t come out from any label, why don’t you make a deal with an underground label and make things easier for you?
The idea of free downloads and CDs handed out for free proved to be successful so if a label comes up with an interesting offer we will surely take it itno consideration but we don’t really push the issue of getting signed.

I know 6 bands called “Nadir” including yours, does it mean anything in Hungarian or do you use it as English meaning? Did you ever consider changing your band name because of the other bands called “Nadir”?
„Nadir” was the title of the very first Dark Clouds full length album, this is why we chose to use that name. So we don’t plan on changig name again. To the best of our knowledge, the other Nadirs don’t play this kind of extreme metal. Of course, it’s not an ideal situation when several bands have the same name but people got used to it so we want to keep it. Besides, bands come and go and maybe someday we will be the only ones known by this name… 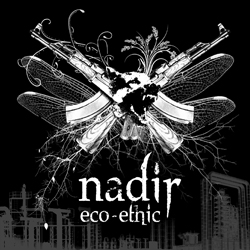 "Tenacity" and "Those Who Bought The Rain" were chosen the best albums in a contest in Hungary, can you tell us about it? What kind of contest was it? Etc.
That’s a local annual award when editors from all webzines vote for the pervious year’s best band, bast live atc, best studio album, best debut etc. “Tenacity” has been voted the best debut of 2005 and Nadir has won the “Best ilve act” category two years ago.

I heard you will publish another album in 2010, how is the process going? Did you decide its name, track list?
Everything has been decided. We are gradually putting our songs from new upcoming new album on our myspace site and by the time this inte is published the whole album can be downloaded from our blogspot site. The album is called “Eco-ethic”. It’s going to be really heavy yet very straightforward and catchy -and our best sounding album to date.

I heard your lyrics are about public issues, what exactly do you write about, what bothers you?
Our lyrics mainly deal with many kind of social issues and on the new album we moved towards environmental stuff, mainly animal cruetly related things. We talk about different problems (without offering any definitive solutions, though – it’s good to deal with all these current problems, to react to them and, eventually, to search for possible solutions but it would be crazy to say that we have the solutions) but we don’t really analyze anything, we react instead. And we do it more specifically and in a more direct way than ever. So, we think it would be o.k. to say that these lyrics, going way beyond the phenomena and the problems themselves, reflect a certain way of thinking and acting – a mentality and a lifestyle, that is. 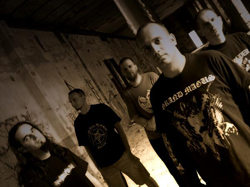 How about your shows? I watched your performances on MySpace, it seems really fun. You took place in such cool organizations, which one can you say the greatest? Do you have any tour plans as certain nowadays?
Our concerts are about to get rid of all the bullshit we have to face every day and to let lots of energy out. It’s not so simple for us to get moving & start touring from here so we just play a couple of shows. Quality above quantity. For the first half of 2010, we have already been booked for two very important local events…

Do you know anything about Turkey except the Viktor’s connection with Extreminal? The bands you like etc…
Not so much, apart from what we know from him about your metal scene, sorry. Maybe except for a few Turkish bands that make it to Hungary from time to time. Otherwise, we can see that the metal scene is getting stronger every day over there. You have more international events than ever before, right? And, of course, we have quite a few Turkish monuments in the country from the historical past…

That’s all for now, do you want anything to add?
Thank you very much for your interest and support. Feel free to download our new album “Eco-ethic” from http://www.nadir-hungary.blogspot.com and to visit us at www.myspace.com/nadirhungary