Symphonic extreme metallers  Mortuorial Eclipse reveal the artwork of their debut opus, which will be entitled “The Aethyrs’ Call”.
The band describes the album as:
“A piece of art which combines Blackened Death Metal”  with symphonic compositions and ancestral resemblance, extended through dark and intense passages occasionally assembled into exquisite dramatic sections.” 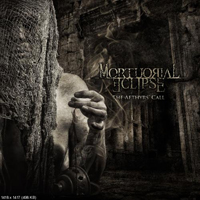 Tracklist:
01. The Summoner’s Procession
02. Advent of a Sinister Omen
03. Crepuscular Necromantic Visions
04. Perpetual Covenant
05. At the Gates of the Marduk’s Shrine
06. Brotherhood of the Serpent
07. Orion’s Progeny
08. Submission
“The Aethyr’s Call” will be released through Art Gates Records in Spain on February 25 and rest of Europe on March 1st.
The album has been produced by Mortuorial Eclipse and co-produced by Matías Takaya, mixed and mastered by Arek “Malta” Malczewski (Decapitated, Behemoth, Vesania) at Sound Division Studios in Polonia.