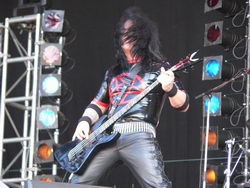 Although MORBID ANGEL’s upcoming album does not currently have a name, its title will likely begin with the letter “I”, in keeping with the band’s tradition of titling their albums in alphabetical order beginning with 1989’s “Altars of Madness”, and continuing through “Heretic”. MORBID ANGEL’s current lineup includes Vincent, Azagthoth and drummer Pete Sandoval.