"Ancient Rites" , that released in 2003, received positive reactions. If I’m right, one of the songs, ”Sweet Soul of Shadows” was chosen on a radio in that days. Can you tell us about that?
Lues: It was first song on the album, and there was good catching melody. So we use that song as “promotional song”.

There are various talking about your style. Such as Dark metal, Black metal, Gothic… How do you define your music?
Mirox: At the beginning we use to say we play blackmetal but soon we noticed that our music is turning to quite “overmelodic” and just different as blackmetal usually so we started to call it darkmetal. That is not really important what people call our music. more important is do they like it or not.
Lues: One “fan” call us “poster-whore-gay-wannabe dark metal”, I like that. 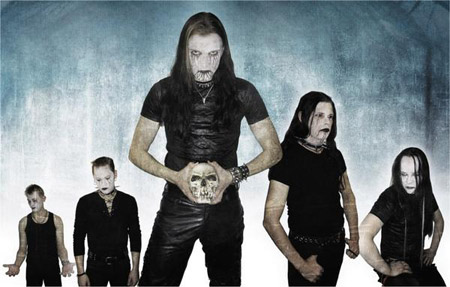 You have relesead ”The Creatures of Loviatar” -to me, one of the best albums- in 2006. How could you harmonize keyboard and music so well? Usually using so melodious keyboard actions bothers some of the bands. But you guys did it great!
Lues: many of our songs have be based to keyboard melodies. First come key melody and later guitar. So many times it is the guitars, what make the harmony. We have to thanx also Arttu Sarvanne (master of studio Watercastle) he have help as with sounds and keyboard harmonizes.

Now that I reach you, the guestion that I want to ask so badly is that: How on earth did you guys do such a great song like ”Tuonelan Lasten Tanssi”?
Mirox: Well, it was born just like our songs usually: shaguls got good material, I got good riff. in our training place whole band gathered to play and try different versions. Lues made finish lyrics and so we had new masterpiece.
Lues: I had write earlier lyrics to song “Verenkantaja”, and send that song to Finnish national rock-lyric competition. They like song and invite us to finale of Finnish national rock-lyric competitition. On the final had play tree song with Finnish lyrics so I write “Kalman kevät” and “tuonelan lasten tanssi”. Ancient northern people believe that northern lights are souls of the death children, so I thing it was good topic of song.

You are dead silence for four years. What are you doing these days? There is news about brand new album of yours? When will it be released and how will be the sound? This is the most intriguing question form actually.
Mirox: Yes, there has been that section to more drinking and less playing… seriously some familymatters and other things was taking our time. Band has worked all the time but it has been just very slow. Now Mirzadeh has been existed 10 years and we tought it´s time to do something more, so we started to record new album. we hope it will be released… perhaps in December. Recording studio is different than before so you can wait different kind of sound. Songs are very carefully finished and good stuff I dare say.

In which country have you had an experience of live performance so far? (The reason that I ask this that I wonder if you will come to Istanbul for a gig. 🙂 )
Mirox: Actually we had never been playing outside of finland. Few times we had negotiated about gigs in other countries but those has always failed. It would be nice to see you someday in istanbul. we´ll see about that.

What about the band called Nome that you were in? Will you go on with them?
Lues: Anyone of us not have play on nome for long time. Music of nome have change from that time when some of us play in that band. We have talk with nome that maybe we some day we play and drink with them and memories the old days. 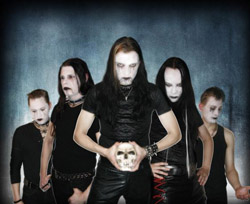 Who are you listening in this times?
Lues: I not have find good new bands for long time. Last good band what brings something new, was Kursk, they play very atmosphere metal, with Russian lyrics, by the way I like also Red army choir. Some times I drink red wine and listen old heavy bands like Helloween, Iron maiden, King Diamont, W.A.S.P etc, I like nostalgia.

What is your opinion about the best Black Metal Band in North?
Mirox: Mirzadeh… oh shit, that was not bm.
Lues: I not have listen new bands long time. I have like lot of some albums of Thyrane, Dimmu borgir, Emperor and Covenant/the covenant. New black metal is so synthetic. I for example like lot more demo songs of shadempire then they albums, they albums have to “good” sound. I thing Mirzadeh go also more nature way with saund, with new album.

What do you think about the style that Dark Throne and Satyricon have created? Do you think that Black Metal is going to be like this? I mean, will there any be radical changes?
Lues: Last time when I have listening satyricon they had move to more rock style metal, I like it. Lyrics had more space and songs was wery rytmic.

How can you describe the Dark Metal style or the spirit that stands out with you?
Lues: Over melodic gay whore wannabe dark metal =). Seriously “strong harmony and melodic dark metal”

Thank you for your time? Is there anything else you would like to say?
Mirox: Thanks for your interest about us and greetings for all metalheads in Turkey!