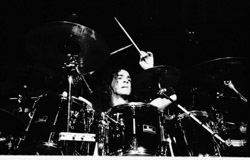 First of all, what can you tell about Mhorgl for the ones who haven’t heard your name? Who met whom initially etc.. ?
Louis: Mhorgl is a Black metal band hailing from Perth, the capital city of Western Australia. We’ve been in this current lineup for about 2 years now, although the band has been in existence for 5 years. The members are Myself (Louis Rando- Drums), James Campbell (Bass), Sam Moretta (Vocals) and Robert Thorpe (Guitars)

Your last album is very successful, an album giving no concession in the name of black metal. How are the reactions towards the album? Can we say that you’ve succeeded in what you wanted to do by Antinomian?
To be honest, we didn’t have a specific goal for this album. Undoubtedly it was going to be fast and intense as possible, that’s what comes naturally, but we didn’t let any preconceived ideas get in the way of our exploration as a band. We just released all the material we had written within a certain period. We are definitely happy with the final result of the album, it superbly showcases everything that Mhorgl is up until this point.

If we compare Antinomian with your previous album, are there any differences musically or something else? 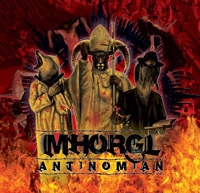 Antinomian is far more ‘live’ and ‘intense’ than The Sacrificial Flame album because the process of writing was far different, and now Mhorgl is a full band. The first album is entirely the work of James Campbell and Sam Moretta, and was a studio based project with little aspiration to be taken to the stage. Hence the more epic song structures, more doomy midpaced material, use of symphonics etc. I think it’s still a great album in it’s own right and we still play many songs from that album live. In fact, the track ‘The Paean of Hangtyr’ on Antinomian is a re-recording of the original, taken from The Sacrificial Flame. We thought it was a great song that stood the test of time and deserved an ‘upgrade’.

Is there any ideology you want to spread with your music?
No not really. I think ideologies are a hindrance to expression and growth to the individual. As soon as your subscribe to a particular ideology, you limit yourself to its parameters. The members of Mhorgl advise you to think for yourself and draw your own conclusions on issues. Don’t subscribe to ’common’ or ‘popular’ belief.

The most striking song in Antinomian is Ozzy Osbourne’s Mr. Crowley. What’s the mentality of covering this song?
On our previous album, The Sacrificial Flame, we covered the Venom song Countess Bathory, taking the basic essence of the track and completely reinterpreting it and making it more extreme to fit Mhorgl’s sound and style. Mr Crowley is a continuation of this idea, taking a song we like but is far from our sound in it’s original form and reworking it to fit Mhorgl’s style. Hopefully in doing so we are adding something to the original, updating it and keeping it relevant in the modern age. 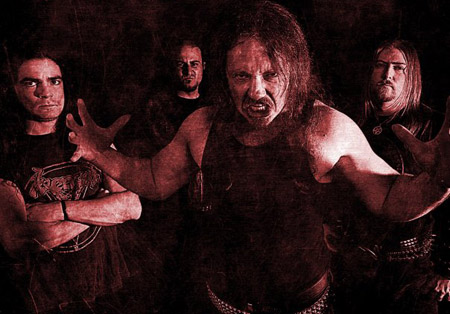 Between your first demo and first album, there is a year break. Well, why are there three years between your first and second album? Why did you wait so long for a second work?
A lot of things changed in this time, namely the introduction of two new members, Robert Thorpe and myself. Mhorgl also took off as a live band after the first album, playing many shows across our town. Once we began writing again, the material flowed quite quickly. 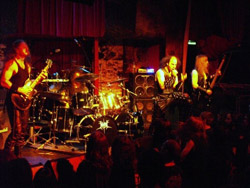 I want to ask your Darkthrone admiration. Do you take them as a model?
Not so much a model, but every member of Mhorgl has a great appreciation for Darkthrone. They epitomise a classic era in Black metal history, and have some tremendous albums in their catalogue. Their songs are somewhat timeless.
Our guitarist thought it would be unique to make a Darkthrone ‘medley’ of sorts. That is Necrohatred. Check it out!

You haven’t experienced any member changing since you’d been formed. This means that you hit the road with right members, doesn’t it?
We just added two more members to the founding two members. We’re stable as a band now and look forward to many years of spreading our pestilence!!!!

Your drummer is playing in death metal band Nervecell from Dubai. We can also see that other members of Mhorgl are taking part in Tyrant. How is the feeling that playing in other bands and in other locations?
Being afforded the opportunity to perform in places like Dubai, Turkey and Europe has been amazing! It’s a great character building exercise to sample different cultures and meet so many new people. I hope to travel far more in the future!
Playing with a different band in a different country is interesting. You suddenly become anonymous again when you leave you hometown. It means you can get away with a lot more! Hehe….
It’s great to see how different metal scenes compare to the one you grew up in. 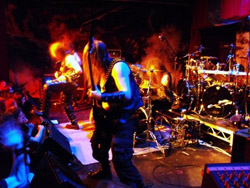 In your opinion if the members of a black metal band just listen to black metal, will they achieve something important musically? Do you agree that musical diversity distorts black metal’s magic and purity?
It all depends on the mindset and motive of the individual. If you’re merely recycling your influences, it’s boring and pointless, but if your creativity stems from a deeper source within you own nature, the results will be more individuated and creative, and no one will be able to duplicate you. I think the spirit of black metal is found beyond black metal music itself. The music that you hear is only our human reflection of a lager sentiment.

If we have a look at the latest albums and bands, do you think that black metal has changed and lost its purity? Where it’ll head to?
I don’t really stay up to date on what new bands are doing so much, but I think sometimes the black metal idea is distorted and sold as a gimmick for the sake of profiting from naïve youth, and sometimes it is done straight from the heart with no commercial intent. In the expanding metal world, everything’s available, even Black Metal to suit any listener, young, old, true, false, etc, so every sound will find an audience. I know what I like, and to tell you the truth, a lot of recent Black Metal releases haven’t inspired me very much. Not like the old days. I can’t be entertained by the same ideas over and over again anymore.

How do you find the music area and underground area in Australia? There are well known bands we know it but what about local bands, concerts, bars..? How often the well known bands tour there? What can you tell us about this issue?
The Australian scene has always been quite healthy. Among our five major cities, we have many talented bands playing various genres of metal, some to international acclaim. Some great bands to check out include, Portal, Astriaal, Cemetary Urn, Dungeon, Bloodduster, Psycroptic, Abominator, Damaged, Alarum, Gospel of the Horns, Alchemist, Grotesque, Wardaemonic, Darklord, Beyond Mortal dreams, Shackles, Nazxul, The Dead, Sadistik Exekution, Impact Winter, Ignivomous, Denouncement Pyre, Pestilential Shadows. There are frequent shows and a healthy live scene down here. The average crowd turnout for a local show is about 100-200 people, which is quite a healthy figure considering our small population.
There are a few good touring companies bringing International acts to Australia, the most prolific being Soundworks. This has really boosted the scene as it’s given local bands source of inspiration to play metal at a higher level. Australia is very isolated but the efforts of promoters, labels and bands keep the scene in quite a healthy condition. 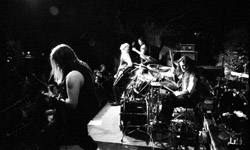 If you have the chance of touring, what bands do you want to tour with? Or, do you have any absurd experiences during your concerts?
I can’t speak for the whole of Mhorgl, but bands I’d like to tour with would be Sadistik Execution, Deicide, Mayhem, Motley Crue, GG Allin (rip) and Matchbox 20. Ha! Just to blast some unsuspecting humans with our rapturous inferno!
We’ve never really had any absurd live tales worth telling. The odd blood nose here and there but nothing too savage!

I want to ask questions about the world. What can you tell us about global economic crises or rising terorism? Do you experience them in your country?
It’s hard to have a stable opinion on exactly what is going on in the world as most sources of information are corrupt and biased to some degree. I understand the economic crises has not been as bad for Australia as in some other parts of the world, and terrorism….well, it seems to be the voice of the ignored and downtrodden. Terrorism is what happens when normal lines of civil communication no longer work, but terrorism fails, when did terrorism implement some lasting ideal of any value?! I think it’s sickening and absurd. Musical terrorism is the way forward!!!!!!!!

When almost half of the world experience winter, how it feels that swimming in Christmas?
Ha! It’s great! Christmas in Australia marks the beginning of Summer, my favourite season. I like to get outdoors as much as possible! I live next to a great beach so a lot of swimming is done at Xmas time. Fuck Christ! 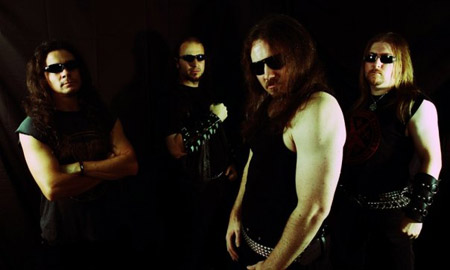 Last questions.., hope we don’t bore you. Can you tell us about your music system in home personally?Do you listen to music by grammophone by being old school, by tapes, by CDs or by mp3 players? What is your choice?
I listen to CD’s mainly. I also use You tube for the sheer convenience of it. It’s a great way to find new bands and stream material at the flick of a button. Having said that, the future of the music business relies on individuals buying CD’s so get out there and CONSUME!!!! Our livelihoods depend on it! It’s hard to make plans when the band doesn’t pay for itself. 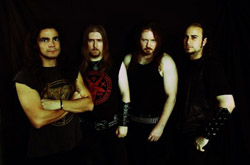 Is there any name the band takes as an idol obsessively?
No, not obsessively at least. We have many influences and favourites, but we try to be individuals instead of followers and contribute our own art to the world. Great influences would be Bathory, Darkthrone and Venom.

The questions are over. Thanks for your answers. Do you want to say anything to Extreminal and listeners who have just met you?
Thanks for taking the time to find out what Mhorgl is all about.
Be sure to check out www.mhorgl.com and www.myspace.com/mhorgl for purchase info and news of further developments in the Mhorgl camp.
Hail torment and fire!