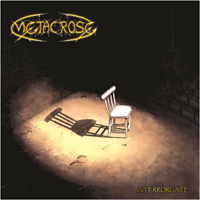 The Brazilian band of Death Metal, Metacrose, discloses the cover of the album “INTERRORGATE´´. This is the first conceptual work of the band, scheduled for release in the beginning of the second half of this year. The 10 tracks, all authorship of the band, possess written lyrics from questions that address topics such as the human condition, ethics and the malaises contemporary.

Curiosity
The album’s name is a neologism created from the merger of the word, “INTERROGATE´´,  of the language english with the word “TERROR´´ of the portuguese language. The first term refers the lyrics in form of quest, between them “What’s wrong with Killing?” and “How can I know who I am?”. The second symbolizes the aspects tragic and grotesque of a determined vision of reality: fear, suffering and non-conformism in the face the pains in the world, as also feelings of aggression, of revolt, and the violence aesthetically sublimated in the compositions of the band.

Graphic art and music production
The Renowned cartoonist Edi Guedes, with several works recognized in the United States, signs the graphic creation. This is an added attraction to the band’s fans and lovers of the ninth art. A meeting between the playfulness and violence, which translates in visual language the atmosphere of the disco – In it has of more far-fetched in sequential art. Lastly, the musical production is work of Victor Hugo Targino, which is among the most creative and competent brazilian producers of the heavy metal of the actuality.

Listen the song “What’s Established?´´ below.