Hi! What is in the progress in band at the moment?
Bor: Hi! We temporary stopped our activity because at the last gig in October our drummer had been hurt during the conflict with sick club’s security guard. Our drummer is recovering now. Generally we’ve got a lot of ideas for new songs, we just need to materialize them. A couple of new tracks is already done, and I think, we’ll perform them at the nearest gig. 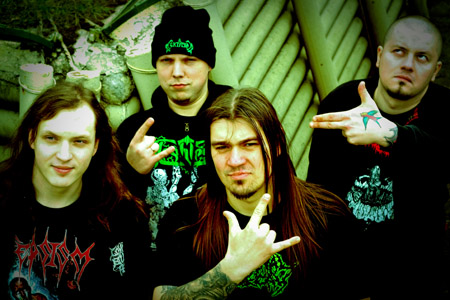 ‘Human Destruction” was released by Coyote Records in May. How was the preperation period of the album?
Bor: We prepared to the record for a long time – incredible quantity of alcohol prepared fertile soil for sick ideas, we spent several years to create and sharpen the material, as a result in the end of 2009 we started to record our instrumental parts at Primordial Studio. And this stage was finished in January 2010. But then we met some difficulties – Colin Davis spent half year on mastering, that’s why we delayed the performance. 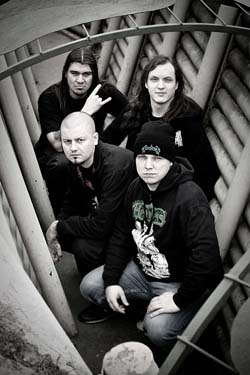 Coyote Records has sent me the album. It’s pretty good. All grind fans will love it. How is the reactions about album? Are the sales good? Actually it’s funny to ask with all the mp3 rush. Let me ask this way? Is it being downloaded too much? 🙂
Bor: I agree, the music recorded on CD is an entire ritual. You can listen to the music (in awesome quality compared with mp3 quality), view the booklet and enjoy the art-work. But in spite of it’s minuses mp3 also has a great plus – you can always listen to mp3 and decide if you like the material on the album or not. And in such a way you can separate the majority of crap you can buy and then you will not think how to get rid of it J

You have Batu (Cenotaph) in Approach of the Enemy’. How did it happen?
Bor: We had a tour in Russia together with Cenotaph in 2008, where we became friends with Batu and his super-band. And the awesome idea about the participation of Batu as a guest came into Coyot’s mind! He planned to invite some more guests, but because of tight deadlines of the release and deliberation of other musicians we can hear only the leader of Cenotaph. Great respect for him!

Do you know any other Turkish bands?
Bor: Of cause, your scene is very interesting and hard-hitting. With great pleasure I listen to the releases of such bands as Decaying Purity, Carnophage, and Suicide. Not long ago I have found for myself one more outstanding band of yours: Decimation with their new release "Anthems of Empyreal Dominion", it’s a bomb, I think.

There has been important developments in Russia lately. There are a lot of good band and more importantly there are more printed publication and great labels. What do you think about your country about this? Are you satisfied with attention and fans?
Bor: You are right, my friend – last years brutal scene has risen in our country, that makes me happy. Now there are a lot of bands, which shows it’s allways pleasure to see, for example Aborted Fetus and Dormant Carnivore from Perm, Oneroid Blood Pressure and Vx from Kursk, Coprobaptized Cunthunter from Belgorod, Cephalic Impurity from Izhevsk and a lot of other bands. And it’s notably that brutal labels turning out their products are not inferior to world known labels.
And about fan’s attention and attendance I’d like to say that exept the capital, fed up with big concerts, everywhere in Russia a lot of people come to gigs and get a lot of pleasure listening to brutal music! 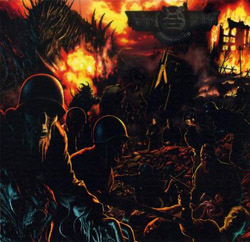 Hellraiser is an awesome Motorhead cover. Pretty good I think. But when I listen the album from beginning to the end over and over again, It felt like it has spoiled the concept of the album. I mean, in a fucking grind album, such as a melodic song bothers me.
Bor: I think, that a lot of people listening to our album get surprised with this song. But nevertheless this british cool smash-hit let you take breath after half an hour of grind and after this small respite Solid State finishes off those who has relaxed too early.

Album cover design is great! I focused the cover for a half an hour and I created many stories in my mind. Who did the design and what did you try to tell? Is there any story?
Bor: Wow! half an hour!? I’m glad to heare that the album cover gives so many themes to think about. It was created by one of the most talented painters in this sick art – Toshihiro Egawa. I think he has met the challenges perfectly. Everyone has his own associative arrays – for example, I think that it shows us the imminent death of all the mankind from military experiments, like uncontrolled soldier-zombies, epidemics of graded viruses or nuclear holocaust. it doesn’t matter – the apocalypse is near at hand J.

What are the themes about the songs, how does it happen and what inspires you?
Coyote: On this album of the text became fantastic in a rebag with military themes. Inspire books and films. I look films much and I read books. Though time at me isn’t enough from for works in Coyote records. 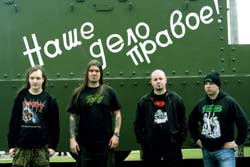 My favorites are ‘The Punishment Zombie Squad” ve ‘Crisis Of Our Generation” To you, which song is most impressive, especially at first listening?
Bor: Yes, these songs are the most wanted at concerts. And my favourite songs are "Human Destruction" with it’s toughness and "Approach of The Enemy".

What are you listening, among the new albums?
Bor: I groove the last Defeated Sanity – I like it all, starting with music, incredible technique of the musicians, beastly vocal of A.J. Magana and finished with powerful sound in the spirit of Pyrexia`93 and great cover painted by the same Toshihiro Egawa. Also with great pleasure I listen to the new works of Immolation, Cenotaph, Sarcolytic – these bands kill me with their atmosphere. I like Amagortis, this year australian Disentomb and a lot of other bands, I can’t even name them all J
Coyote: That I long listened to the last there was a latest album INTESTINAL ALIEN REFLUX . A stupid and at the same time mad album with a variety of uterine vocals. And last GORTUARY the same me surprised for they have introduced elements progressive in Fucking Brutal! 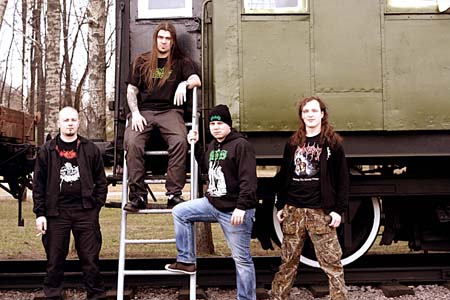 Actually it would be great to see bands of Coyote Record on Turkey? What do you think a "Coyote Brutal Fest.6" in Istanbul? 🙂
Bor: Ha-ha, I’d make some concerts in Turkey with great pleasure !

I thank you on behalf of Extreminal Webzine. Anything else for you would like to say?
Bor: Thank you for interest expressed to our work! To all the fans of sick music – stay devoted to underground, read Extreminal Webzine, listen to Membro Genitali Befurcator! 😉