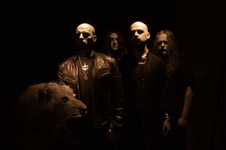 Melechesh who is going to record their 5th unnamed album on April 10, has chosen İstanbul to record the new album because of its impressive sorroundings and the meeting point of east and west, in an unprecedented move in metal. By the elite sound engineers in Turkey, Babajim Studios, the album is ready to be recorded. Also the album is expected to come out in 2010 summer from Nuclear Blast.