First of all, Hi! to the Master of Death Metal. And thank you for the opportunity for interviewing with such a legendary band.
Paul : You’re welcome, interviews are important of course my friend. 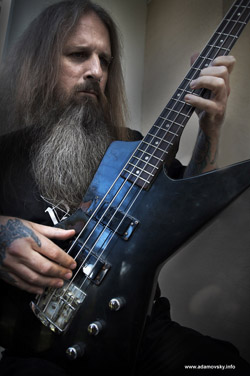 Hey Paul, what is going on these days on Master’s side, how is the life going?
Well, been touring and playing shows regularly this years as always. The band has been very busy ever since I moved to Europe 11 years ago.

You will go on a tour with Massacre and Grave on Europe next summer. Which countries will that tour include?
I am still waiting for the final dates for this trek. We will play 25 shows along side Massacre and most likely Macabre from Chicago as Grave recently cancelled.

You are one of the well-known old school bands. So that you were found on the same timeline with bands like Death,Morbid,Angel and Possessed thus making you one of the legendary ones. Can you tell us about those times?
In the beginning times were tough as this was a relatively new genre back in the day and people just didn’t really support the shows unless you played in your own neighborhood. We actually teamed up with Death in 1987 and it was an over 21 club called the Exit in Chicago. Because of the over 21 situation back in the day a mere 25 people came to support Death and Funeral Bitch which was really quite pathetic.

What obstacles did you encounter?
Everyone has great obstacles in life. The hardest thing has always been getting professionals to stay together.

And how was the communication of you with those bands?
I never really communicated much with the aforementioned bands back in the day.

I suppose 80’s were a little hard for you. Especially your foundation timeline is spread to 5-6 years. What was the reason for that? I think your are one of the rare bands among other legendary ones that suffered such difficulty?
We had management, these days I handle all of this business myself and ever since I took over things have improved considerably. We made many mistakes and signed some bogus contracts in the early days. Hindsight is 20/20 so I always look to the future which is always the best thing to do. Also these so called innovators you mentioned in the question were always good at kissing ass. I always told everyone to fuck off and suffered the consequences. I have a more realistic and professional attitude these days and try to get along with the bookers and promoters and since this has happened we get many more gigs and play many festivals in Europe every year. 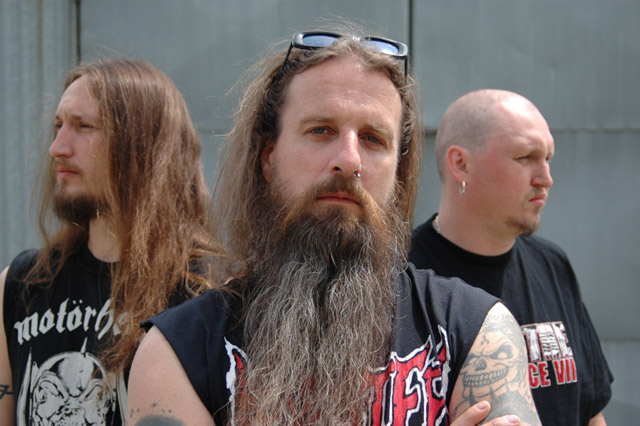 You started recording for your first album in 1985, but apparently you encountered some difficulties, so released that album in 2003 not with your publishing company, but with From Beyond. Can you tell us about the events took place in 1985 and those difficulties that you encountered?
Yes we signed a contract with Combat back in the day, but the album was never released due to many mistakes on the part of the original drummer Bill Schmidt. He was always afraid of his own shadow and we were left behind so to speak. Since we never signed the contract many bands went on to have great success and we were left out in the cold. After this bullshit, I took over the reigns of the band and never looked back. Schmidt can be found walking in the forest these days in Chicago talking to himself to anyone who will listen. Such a talented individual he was, it’s really a shame.

After those hard 80s, with the coming of 1990 you rose up and recorded first full-length album. If you wish, we would like to talk about that special album that carries your own name, it’s all process through recording to releasing, and it’s influence over people?
Actually the first Master as well as the Abomination debuts were released in 1989 followed by the Speckmann Project in 1991. The Speckmann Project was originally intended to be the first Master release but in the end Nuclear Blast didn’t like the crisp Scott Burns production so thea tried him again and remixed the original 1989 mix that was done in Chicago at Solid sounds Studios in Hoffman Estates. In the end we didn’t want to waste the other recording so it was released as The Speckmann Project.

I suppose years 1990 and 1991 were quite satisfying for you. We can see 2 studio albums and a split record with Abomination. Would you like to tell us about that split album?
This was only split 7-inch to get interested in both bands and it worked. Nuclear Blast always had a knack for good promotion and this certainly paid off in the end. 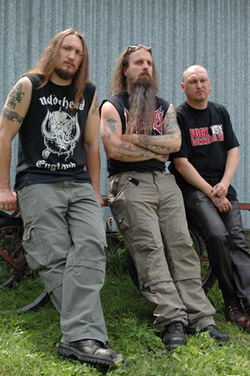 About the 2. Full-Length album that you published in 1991. On the Seventh Day God Created… Master album. We found a very special surprise in that album that increases our enthusiasm. Paul Masdival(Cynic, Gordion Knot, ex-Death) concomitances album with his guitar. If you wish we would like to talk about how Paul joined to album, recording process and it’s influence over band’s fans?
He had absolutely no influence over the fans or the recording to be honest. The songs were written by myself and Jim Martinelli when he waltzed into the studio. He only came to fill in and played the solos after each one was rehearsed for and hours or so. He is and was a true professional through and through. But even today he says this was the worst album he ever recorded and the music was quite boring. But it went on to sell 40.000 copies worldwide which is no small feat for this genre for sure. Paul was a friend of Scott Burnes and was called after Jim Martinelli was too drunk to play. Jim has since become a reformed alcoholic and no longer drinks, so great for him.

After 1993, yet again you enter another difficult timeline and after the Collection of Souls album that came with Nuclear Blast, you found yourselves in another five years without any albums. Can you tell us about that five years? Especially your agreement with Nuclear Blast and the Collection of Souls album came afterwards, it’s recording and release process and the discontinuance period?
Nuclear Blast didn’t like the album and we were subsequently dropped, end of story. In 1998 we were offered a contract at Pavement and have been recording ever since really. We recorded again in Chicago where the Master debut was recorded and the record just didn’t have the finesse of the earlier recordings. We did much experimenting on this third offering and I personally still like this record and many people have said the same. We record records for ourselves as any professional artist should and if the people like it so be it if they don’t they can kiss my ass. It makes no sense to write the same record over and over!

In 1998, you finished working on your 4. Full-Length album, published it and entered a 12 year period that you published albums non-stop, performed everywhere, in which you published around 6 Full-Length albums, 1 live album and compilation album that consists of live recording. Even though they were all with different companies, you were constant and shiny, which indicates that your band can live through whatever obstacle you may encounter. And I think the suffering on past might has helped you to achive that. What do you wish to tell about that?
Suffering is always good for the soul. If everything is handed on a platter one takes things for granted and many die for sure. We have worked hard to achieve the limited success we have had and will continue to do so.

Until 2002, you released a live album and video record vhs of Mexico concert. Besides that, there was a possibility of moving to Czech Republic. In that particular, we can see you played with legendary band Krabathor from Czech republic. Throughout that, whose idea was live record?
The live record as you call it was bootleg and was never officially sanctioned by Master. Nevertheless there are some interesting moments on this recording. Unfortunately the recording volume rises and falls on this and really it’ a shit mix perion and there is no video, it’s only audio on a cassette.

How did that effect the scene?
No effect as I said a cassette released in Mexico only. 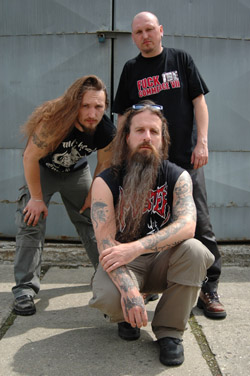 And what was the reason for moving to Czech republic?
Christopher, Skull and I discussed a project called Martyr after spending time together on The Malevolent, Master and Krabathor Tour in 1998. While recording our project Bruno left the band Krabathor to form the band Hypnos and I was asked if I was interested in join Krabathor and of course any real musician will go and work anywhere in the world. This was an excellent opportunity which took me to Japan for my first excursion with the band..

What did you do with Krabathor?
I wrote songs and recorded two albums with the band and toured extensively for four years.

By the way, crowning that period with 2 magnificent albums was a great thing for people like me who worship Master and Krabathor.
Thanks.Let’s Start A War was recoded the same year as Unfortunately Dead and both records were killer in my opinion. Many of the Krabathor fans didn’t like the two Krabathor records with me on them, but I had a great time and have great memories of recording them for sure.

Label changes, member changes, including in different projects, somewhere around 10 Full-Length albums, and a band that always performed well, never given up, never disbanded, a flawless band, Master tries to tell us about the reality through its music. My question is, why did Master had to change these many labels and members? And how come Master always found a way out of that?
Many musicians have an unrealistic view of this crazy business and think when you join a band you are instantly rich. We will always struggle to continue. I have had a stable lineup since 2003 and hope it continues.

Since the beginning, the only thing stayed still was your style and your melodies I suppose. Despite very little changes, your general construction of songs never got upset. I suppose the foremost reason for that is you worked with people who have similar music tastes? What do you think?
Style is an important thing. I realize many famous bands change style like they change their underwear but real bands like Motorhead for example always stick to their roots and I choose to do the same. 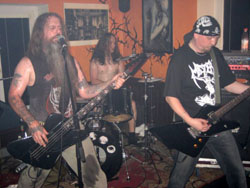 Albums you released after 2000, we can see you added some effective solos besides speed and hardness. Can we say the reason is that the members werent that young anymore and throughout the life, people can get more mature and cruel?
I just found better players. Good guitar solos have always been really important to the Master sound.

Is there anything you would like to tell us about the current status of music market and the direction it is going on? How do you find Death metal nowadays and what do you think it is going to be like?
There are many crappy bands out there copying the old legends but I suppose this is a normal thing. I rarely see anything new.

I suppose you are recording anything these days? Are there any plans for an album near future? Is there, when do you think about releasing it ?
The New album called “The New Elite” is finished except for mastering next week and will be released very soon over the next few months.

Alright, thank you for this great conversation and your precious time you spared for us. Hoping to see you in future concerts. Take good care.