From German death metal Mandatory, have been working on the ‘Adrift Beyond’s mixing in the first half of 2010 with Tomas Skogsberg in Sunlight Studio’s in Sweden. The band, who had signed with Xtreem Music in 2009 fall, have just finished working on their first album after 4 demos. 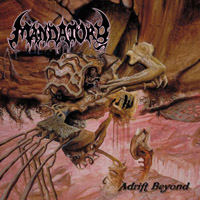 The album whose cover made by SV Bell, is about to release in June 1st.