Here I am again with a rolled-neck and Honkey-Yankee interview on behalf of Extreminal with the vocalist and the founder of Malignancy which is one of the sickest brutal death grind bands of North America. Here is Malignancy and Danny… 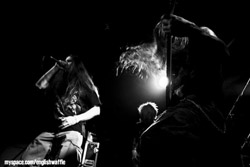 Hi Danny! How is it going in the Yonkers area of the USA, of course from your side…in the sense of new concerts, tours, fests and new songs…etc.
Hey brother! Yonkers is cool. The metal scene here is not so big anymore. There used to always be really killer underground thrash/death metal shows in the 90’s but nothing really these days.

How would you define your band to charm the new listeners who are unfamiliar to your band?
Wow, that is a different question, nice! I would say, if you want to hear brutal technical death metal that does not sound like every other band out there, check out Malignancy. Hahaha.

Up to now, where outside America did you give concerts? Besides your own country and area, which country has the sickest Malignancy listeners and where are you most liked? Which is your favourite?
That is a tough question! We have played Europe quite a few times, either on tour or on a festival. We also played Japan, Colombia and Mexico. It is hard to say, European and South American fans are the craziest in the scene. There is such an appreciation for the music. 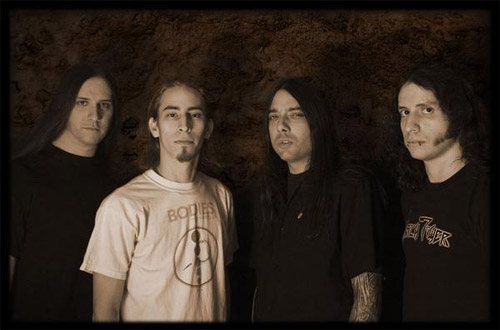 As music is concerned, besides having old school gore-grind, grind-core, brutal death metal elements, you also have quite a classy and an unbroken technique. Is this a natural development? How would you describe it.
I think it is a style that we have refined over the years. I always wanted Malignancy to sound different from the bands in New York when we started. At the time there was so many Suffocation clones out there. Once the line-up in 1995 was secured we were able to start writing better material. Our style now is still changing and growing but we always retain the brutality and technical prowess Malignancy fans have come to expect from us. The guys in the band now are not in the death metal scene as much as me, so they come into sound writing with a different outlook. 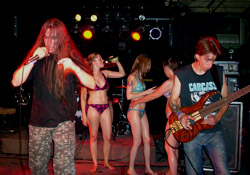 If you identify each band member as the most perverted, the most well-behaved, the “nerd”est , the laziest, the wittiest..etc. who gets which?
Hahahah, I think I am all those things. We all have our personalities. I am a witty nerd that loves to make people laugh with my perverted sense of humor. Ronnie is the coolest dude to hang with and get drunk with. Mike will teach you how to play drums at shows, hahaha. He is always giving people lessons at shows, loves to play indeed.

You will share the same stage with the legendary fellow band Immolation in Netherlands, how do you get along?
We get along fine, we have known Immolation for many, many years. They are great guys! I am really looking forward to playing the same festival with them. We have never played together outside of the United States.

Generally your lyrics have a science fictional concept and carry quite a lot of gore elements; such as cannibalism, mutation, sickness…etc. Is there a special reason to it? In what kind of an atmosphere and mood do you write your concepts? Are you influenced by any lyrical concepts such as movies, books or waves?
All the topics I cover may have a touch of science fiction but it is more close to science fact. I like to research a certain concept and mutate it. Everything I write I like for it to be rooted in fact, or something that could definitely happen. Governments across the world have secret experiments that the general public never knows about. That is a scary thought. I take that thought to the next level and explore it.

I have first encountered your band in the year 1999 with your first album Intrauterine Cannibalism. I was very surprised to read that your band was first formed in 1992. What were your reasons to wait such a long time?
Well back then it was much harder to get a record deal. Most of the labels were looking for bands that were established with a strong following. At the time we were just some high school friends jamming in a basement. It took 3 years to get a good solid line-up that had the musicianship skills to write some good songs. At the end of the 90’s there was a lot of indie labels cropping up all over and we were signed to United Guttural in 1998. 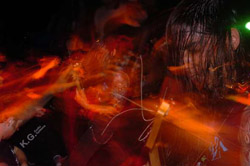 You were pretty active between the years of 1992 and 1998, have given a demo each year. Can you tell us about that period?
It was fun as hell and also a pain in the ass. Malignancy for a brief period was a revolving door of band members. We did release demos and rehearsal tapes during this time. The 1997 Ignorance is Bliss demo was by far the best thing we did in those years.

Honestly, I really fancy your album covers, booklets and merchandise designs. Who takes part in it, who do you work with?
Thank you! In the demo days I used to draw the artwork for the band, make flyers and layout the covers. I still do all that but we always try to seek out an artist that is relatively unknown and have a cover created from my concepts.

Can you share with us one balderdash, funny, crazy, absurd…etc memory that is worth telling. Please use a narrative language :).
Ah, well there is a killer story we have from our tour in 2002 with Godless Truth (CZ). We were driving in France in one van that seated 10 people and there was 10 of us. So it was not comfortable at all, but thats metal right? Haha. We turned on a round about and the trailer wheel came flying off of the wooden, canvas 1925 style piece of shit. Lucky for us we were not driving fast. The promoters heard about what happened and 4-5 cars showed up and helped us unload all the equipment and drove us all to the show. The fucking show was insane. Crowded full of happy fans that we were there playing for them. Great memory.

Unfortunately, I did not have the chance of getting your Motivated by Hunger e.p, naturally I did not listen to it. What kind of reactions did you get after the e.p?
The reactions from this EP were very good and we still get a good response about it. You should download and give it a listen. It was the true Malignancy sound finally recorded. Most of Intrauterine was older material while Motivated was the first album we were able to explore a more technical side to our sound writing.

You are quite involved with the Czech music medium and market. Has your taking part in the Brutal Assault Fest in its first years caused this closeness or was it even before that?
The Czech Assault was out first time in the Czech Republic and there we met killer friends and fans that we still talk with today. We want to play that festival again, hopefully we can soon. The Czech scene has always spawned some really sick and twisted bands and I feel we fit in their scene. 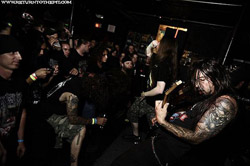 What would you like to say about your old record label United Guttural? At the beginning of 2000s, it took the responsibility of American death metal style, but now there is not even a sound of it.
Malignancy had a good run with UG back in those days. Our CDs were always traded and distributed worldwide in the underground. The label still exists but with a different owner that has another label, so I do not think we will ever see another UG release.

Right from the beginning your drum sound has always been interesting to me. Besides being old school, very rough and primitive, it has an interesting measure, technique and quality. Though your drummer has changed, the same point of view and drum structure is still felt even in your last album. Can you tell us about it a little?
Roger is a guitarist first and a drummer second so he always wrote Malignancy drums from that perspective. I think it really worked for us at the time. Presently Mike has a much more technical approach to his playing. You can hear it at times on Inhuman Grotesqueries. He has more time to play and have fun on the new album Eugenics.

When your Cross Species Transmutation album was released, I had a dirty smile when I saw the album cover, your musical development and songs were by all means were sick as your album cover and booklet. What were the reasons to that change and development?
Well we are a band that likes to progress and it seemed that the next logical step in our development. Toshi Egawa was responsible for bringing that concept to the digital canvas. Using an amazing artist helped get the visceral response I was looking for.

What kind of an obsession does your guitarist have with sweeps? 🙂
Not sure he is obsessed with them, more like he embraces them to give us a signature sound.

How do you get along with Willowtip Records? The owner Tipton is a cool guy and safe in orders. How is your relation with them, are you pleased with the Willow? Will you be there again with your new album?
So far it has been okay. I would like to see our album traded more and distributed better worldwide. We signed a 2 album deal and Eugenics will be on Willowtip.

From my point of view, your last album Inhuman Grotesqueries is definetly the most strong-sounded album and to be honest, I found the production and the sound totally different. What reactions did you get for this album?
Yes, Inhuman was our most problematic album to record in the history of the band. The album sounds good at times and other times I feel it does not capture the intent of the songs. The response has been mixed for this last release but for the most part fans love it.

This year in Maryland Deathfest, you will play with legendary bands like Autopsy, Possessed and Sodom. Honestly, Autopsy’s reunion made me very excited. How does it make you feel to share the same stage with those bands?
It is killer!! So happy we finally are playing MDF again after many years on not being able to. It is the best festival in the U.S. Right now.

Thank you very much for this classy and nice interview. Finally, what else do you have to say to Malignancy listeners and extreme music freaks?
Thanks for the interview. I would like to thanks all the fans out there that embrace own style and sound and help spread the Malignancy around the world. Cheers!! and Stay Malignant!