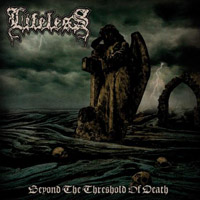 German death metallers LIFELESS will re-release their debut album, “Beyond The Threshold OF Death”, on June 8 via Ibex Moon Records. The CD, which was originally self-released by the group in 2008, was produced and recorded by the bandmembers themselves. The mastering was handled by Vesa Kenttäkumpu from Swedish death metallers EVOCATION.