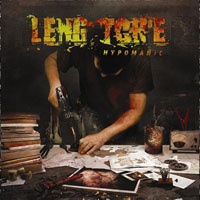 Speakin of your new release ‘Hypomaniac’, what made you decide to record at Parlour Studio in Kettering, UK ?
Nicolas (bass): Actually we only mixed the record at Parlour Studio in England. We recorded everything at friends’ studios here in Belgium and then we went up to Russ Russell’s place for the mixing and mastering. The reason why is that the last few Napalm Death records sound amazing so I sent him a preproduction demo of some new songs and Russ was absolutely enthousiastic about working with us.

What was it like working with producer Russ Russell? Did the release turn out like you wanted-is there anything you might have done different if you had the chance?
Working with Russ was lots of fun. He’s the best producer for our style of music we could have dreamed of and he’s a funny and very hospitable guy as well. If we’d had more time and money I would have liked to record with him as well. Maybe next time. 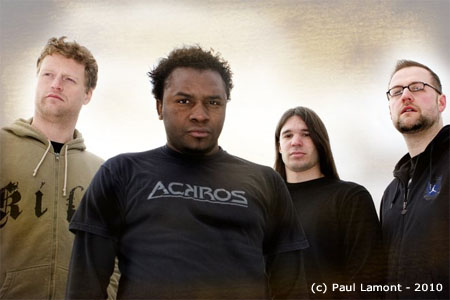 I like your style, kind of a grind/death/doomy/stoner-ish mix-I believe you guys call it razorgrind-it’s befitting…tell us about your songs ‘Misleading Innuendos’ & ‘Totalitarian’-what their about…
Thanks, that’s kind of the whole point. Some people don’t get it or can’t handle thinking outside of the box so it’s good to hear some appreciation from time to time. Both these songs you mentioned are about hypocritical leaders and people who follow them like sheep. Indoctrination of the masses is a big theme in Serge’s lyrics.

What are some of your pix of trax off your 14 track release ‘Hypomaniac’?
Such a difficult question. I like all the songs and that’s not to blow my own horn. I like the in-your-face songs like “A.men”, “Obiter Dicta” and “Totalitarian” but also the more progressive ones like “Refined Torture” or the final epic “Perfervid Odyssey”. “Corrosive Rotgut” is awesome too. I can’t choose!

Being Belgian what is the scene like there? what other killer Belgian bands should we be on the watch for?
Right now there’s not much support for extreme metal bands in Belgium, especially not grind/death bands. The scene burnt itself out with too many bands and too many shows. There’s a slight flare-up in the metalcore section but who knows how long that will last. The deathmetal scene was definitely stronger 5 years ago. Good thing we live right next to Germany! 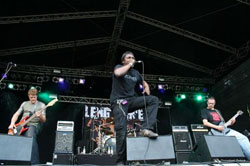 What do you guys do for shits and giggles in Belgium?
Hang out with friends, have a beer (on the street! Imagine that). Serge and myself love to watch MMA fights, while Jan (guitars) is more into basketball. But I’m in the process of converting him as well. Tony (drums) is studying to become an engineer actually so he’s pretty busy with that.

Out of all the Metalfests Leng Tch’e has played which ones do you want to play at again and why?
The biggest one was probably Brutal Assault in Czech Republic, I think they had like 30,000 people for the headliners. So that was fun. Furyfest (now called Hellfest) in France was great. And of course Graspop because it’s in our backyard.

So do any of you guys work at Godiva or a Chocolate Factory? I hear there are a lot of good chocolate factories there. I can venture to say many women would be chasing after you then-you know smelling of chocolate…haha
We don’t need to, we have that special European flair that makes women go moist. But yeah we have the best chocolate and beer in the world. Which is also where our claim to fame ends. Other than that we’re famous for lousy politicians and pedophiles. Not really something to brag about. 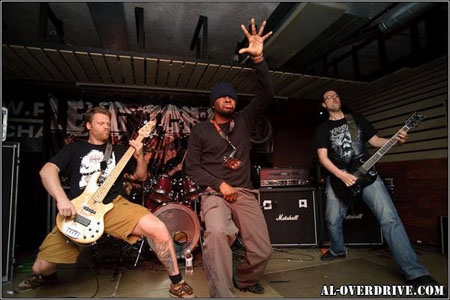 ‘Hypomaniac’ is a great release, how do you like working with Season of Mist Recs? And how many releases did you sign on to do with um?
They’ve been doing a good job in promotion so far so I’m happy. We signed for two releases. It’s nice to be on a label close to home for a change.

Well, thanx for the interview looking forward to seeing you guys when you hit the states.
Thank you and hopefully we’ll make it back over there someday!