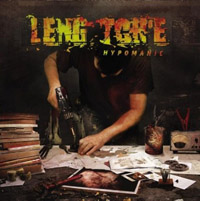 “Totalitarian”, a brand new song from the Belgian grindcore act LENG TCH’E, is available for streaming on the band’s MySpace page. The track, which features a guest appearance by NAPALM DEATH frontman Mark “Barney” Greenway, comes off LENG TCH’E’s new album, “Hypomanic”, which was released in Europe on May 24 and in North America on June 8 via Season of Mist.

DIARY ABOUT MY NIGHTMARES