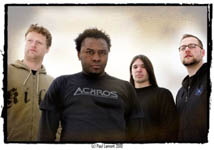 Belgian grindcore act LENG TCH’E has set “Hypomanic” as the title of its new album, tentatively due in North America on June 8 via Season of Mist. The CD was recorded at Parlour Studio in Kettering, United Kingdom with producer Russ Russell.

Check out photos from the studio at this location.

The Order Of Apollyon