Greetings Bojan, how is it going with Kuga these days?
Greetings Petar, its going fine, we play constantly… Gigs in Slovenia and Montenegro are waiting for us and with them; we will circle our entire target field which are the ex-Yugoslavian Republics and also the surrounding countries are as well our target fields. Of course, we would play also somewhere else far away if we get an offer for it. But still, our prime activities are here and concerts which are far away are in our second plan since we sing in Serbian. 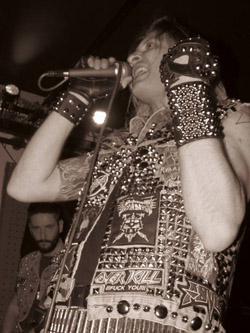 Could you first introduce Kuga to our readers who haven’t heard about you yet?
Kuga is, I might say, an old Heavy/Speed/Thrash Metal band from Belgrade/Serbia who’s first language is Serbian and therefore is more for the crowd from Serbia and the ex-Yugoslavian Republics. There is also interest for us from outside, but these countries are our main focus. Kuga was born in the year 2003 and since then we play in the same way as we did back then. We stayed true to ourselves over the years and the fans like that about us and recognize it and come to our concerts and it doesn’t matter that we now started with the recording of our second album in our 11 year existence. The people don’t care about that and support us very much. Like I already said, we are now recording our second album and we are also planning to make a video for it. A lot of good things await us.

Kuga exists now for a long time and you were often local support for foreign bands that played here. Which of these concerts stayed in your memory in a very nice way?
You said it correct, we played on a lot of festivals and we also were local support band for foreign bands that come here. We also have a lot of our concerts were other bands open for us. We played our first gig as a local support band back in 2005 for the French Death Metal band Bloody Sign, and later for Tankard, UDO, Benediction, Sinister… the Tankard gig from 2006 was the one which remains in good memory to us, a full hall, a lot of positive atmosphere, a lot of happy and drunken Metal fans… we saw them this year again on a festival in Croatia and they are very nice people… together we remembered the concert from 2006. We are also very pleased about our fifth anniversary concert which was held in the great hall of Akademija (local cult club from the 70’s for Heavy Metal and Punk fans here in Belgrade/Serbia) …all the big Serbian bands helped us there and also our friend Ljubisa Racic with whom we played some classical tunes in a Heavy/Thrash style. Ljubisa Racic played also a long time ago in Bijelo Dugme (one of the greatest Rock bands from the former Yugoslavia).

It seems like Thrash Metal is becoming very popular in the last couple of years in Serbia. Which bands would you recommend and how do you see the sudden popularity of this Genre?
Yes, Thrash Metal is becoming very popular and it is partly our fault because we were the first who revived the old spirit from the 80’s. We cheered for the old bands like Bombarder and Heller to stay or come back and now, they are here with us. There is one band that I would like to recommend from Belgrade which already has a good discography; I am speaking about Space Eater. 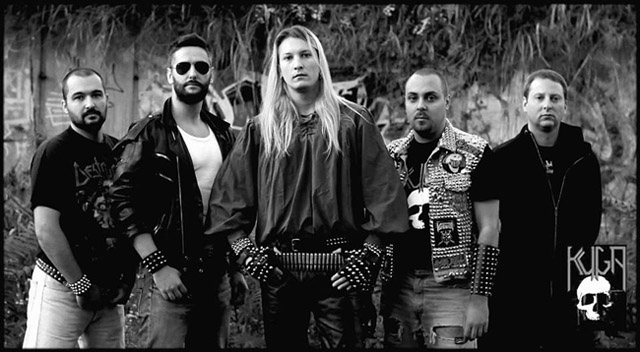 Most of the songs on your album are in Serbian. Do the fans from outside Serbia have a problem to understand the songs?
Like I already mentioned, the music is mainly for the people from the territories of the former Yugoslavia because all the languages from there are similar. We don’t think about it if someone likes it or not that we sing in Serbian. If we wanted to go on the international, we would surely sing in English. We do have some song in English like Rising Death, Lost Soul; Time has come … so that people who understand English can understand our songs. It doesn’t seem to bother anyone; we are now negotiating with a European label for our second album. Our first album was released over the Mexican label Sade Records. It seems that there is no language barrier, what matters is the ghost and the energy and that is what people recognize no matter in what language it is made. That is Heavy Metal and we love it.

What are your songs about?
Our songs are about social injustice, discrimination in society, vanity, evil… the relationship between people and what human scum is capable of doing to reach its goal. Also, there are classical Heavy Metal topics like about the devil, demons, evil, etc. 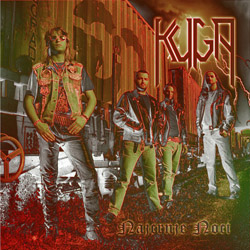 What will be the situation on your next album?
The next album will be a bit more melodically and more Speed/Heavy Metal than Thrash Metal, but there will be also a couple catchy Thrash tunes on it. I believe that it will be at least as good as the previous album.

You also performed in the movie „Crna Zorica“ (a dark humor movie from Serbia). How did it come to this and how did it afflict your band?
Yes, we made the music for the movie and we also appear in a scene in a smoky club. The movie went well and it got some rewards on some international movie festivals. The people from the production wanted a Hard Heavy Metal band and they choose us, they liked us the most… How did it afflict the band? We are very proud for the honor. Off course, there is jealousy on all sites and running away from our band, but we don’t want to talk about it and about the people behind it since we don’t care about them.

You also played on the tribute to Bombarder. What do they mean for you?
Yes, we played on the tribute to Bombarder. Bombarder are my/our old friends and our great idols from the past. We were the first band from the territories of the former Yugoslavia who made a cover for one of their songs… and we also raised them sky high and supported them for years. In the end, 15 bands from all over the world covered their songs which was a big pleasure and honor. We started to cover them back in 2003 with the song “Glasnik smrti” later “Horde” and for the compilation we did their almost Hard Rock song “Princeza”. Our version was very good accepted and we got praises from all sides, starting with that our version is even better than the original to very nice words in the German Legacy magazine.

Any last words?
I am glad that people still like the old Heavy style that we play and that the come to our concert even since we will now bring out our second album. A big hello from Bojan and the band Kuga, stay Heavy and listen to only to real Heavy.