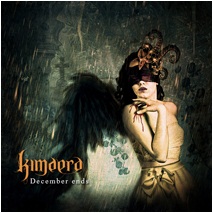 Greetings from Turkey,i heard about you gonna join Unirock Fest. What do you wanna say to audiences?
JP: That’s true.. We are indeed taking part in UNIROCK fest. Even though many Turkish fans are still questioning us if it s confirmed or not. I guess because of the poor promotion the organizers of Unirock are giving us. We have no idea why, usually in respectable festivals, all bands get fair promotion. But anyway, to all those awaiting the band, and I know they are many, expect nothing but a kick ass show and performance, and we promise you that KIMAERA will be one hell of a surprise, especially to those who are not quite familiar with the band.

You released a single which is called "December Ends"but it seems you changed your style a little bit.let us know about your future plans?
‘December Ends’ is different from everything that we have done before; it is very mellow and mostly instrumental. This is why we simply decided to release it as a single. The forthcoming album is not soft at all I can assure you and has no clean vocals, except very few lines. So you can expect an aggressive album, fast, but of course, KIMAERA’s touch remains there through our atmospheric and symphonic passages.

You know ,there is a problem with all Arabic countries in the middle east,what you want to say about this shitty situation? how is situation there now? Still any complexity?Does people want more freedom or the problem comes from any other politics ?
Lebanon is fine at the moment, and I’m sure the condition here will remain stable. Of course Lebanon interacts with its neighbors and what happens in Arab countries is reflected somehow on us, but till now, all is good and I hope it remains so. 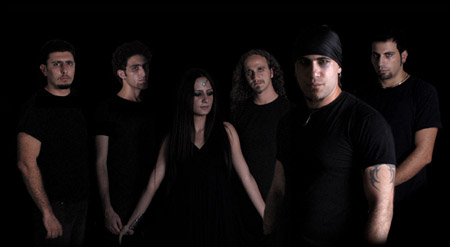 My friend told me there will be a rock fest. In Lebanon that u gonna join.will it be the first time and which other bands will give a concert at this fest ?
That’s true, we are also taking part in Beirut Rock fest. in September also, one week before Unirock fest. It is the second edition of the festival, so it is our first time participating. The festival is headlined by Katatonia and Moonspell. 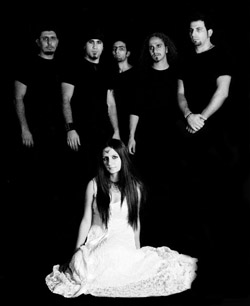 Have you ever played in Lebanon before? What will you tell about Lebanons metal media/scene/bands?
Of course we did. We have been active since 2000. So we played here countless times. We also co-headlined a festival in Tunisia in 2008 along with Dark Lunacy. I’m sorry to say that the Lebanese metal scene is poor, quality and quantity wise. Thus, nothing much comes out of it, except very few respectable bands who are digging their way out. We worked hard enough and we had enough potentials to be one of the first bands if not the first to make it on an international level, even though of course, we still have a long way to go.

I really wanted to see you in Turkey in the begining of the year about mini-Turkey tour but cause of some problems prevented it. Actually i’m one of the people who rejoiced about your agreement with Unirock. Cause i know you guys already wanted to play in Turkey, right?
We wanted to play in Turkey since the release of our first album ‘Ebony Veiled’ in 2006. Since then, a lot of Turkish fans kept contacting the band and expressing their admiration and asking us to play there. But we only got the chance to do that this year, and we are looking forward to it and to meeting the fans there, since I know that the Turkish metal scene is huge.. I’ve been to Sonisphere last year. 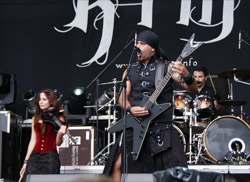 If I mistake please warn me, did you played in Czech Rep. in a few years ago right? how was the deal done and atmosphere etc. ?
As I always say, ‘Masters of Rock 2010’ in Czech Rep. was the best experience for KIMAERA so far, since it was our first European show, and on a high scale with big bands such as Behemoth, Epica, Manowar, Destruction and others.. We were treated with high respect, just like any other band participating in the festival, everything was quite organized and on a professional level. I can say we managed to impress all those who saw us perform, and made a big number of fans there. TheReviews were awesome and we were described as one of the best bands that performed in that festival and we were quite a surprise for many. And we intend to keep it up anywhere we go.

I hope your journey in metal arena won’t be stop,what you ‘ll want to say for Turkish readers ,see you in Unirock ?
Thank you so much for the interview and for exposing us to more Turkish metalheads. To all the fans in Turkey, check out www.kimaera.info and we will see you soon hopefully!!
Darkest regards