Hi! What`s up? What about the effects of eruption of volcano on Iceland hehe? Are you in clouds hehe?
Hey all is good in the ingested camp, yeah the volcano caused some serious problems the other week, effected not just people’s vacations but also touring bands which sucks, parkway drive nearly didnt make it over from Australia but managed to get the first possible flight out to start there tour with despised icon which was cool. 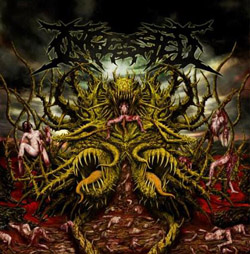 First of all I would like to congratulate on your great debut album:). It was one of the best cd`s for me last year. How has it been received by the fans and media? Are you satisfied from the effects?
Thanks glad you enjoyed it, we got awesome reviews in music magazines in the uk which was really good for us, we have had positive responses from all our fans and good reviews online too, so yeah we are really happy with what we achieved with ‘surpassing…..’

What do you want the listener to get out of Ingested’s music? Would you say the new album is the best place for a new fan to get their first taste of Ingested?
We want the listener to head bang and enjoy the riffs, the debut album is a good start for a new fan but to see us live is the best place to hear ingested for the first time we put on a heavy and ferocious set that will literally rip your face off!!! 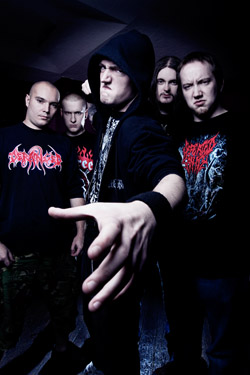 What could you tell me about your works in studio? Any funny stories hehe? Did you toy around with the sound and did you get the result you were looking for? What sort of equipment do you have? How many did you need to record your debut?
Well the recording process for us was quite challenging because we were recording on a farm with no hot water or proper cooking facilities and of course it was october/november so it was freezing and there was no heating in the barn, we were there for two weeks like this so it got a little stressful for some of us but we got through it. cant really think of any funny stories to be honest, that might be because we all got totally wasted after recording each night haha. on the album we used ESP guitars, peavey heads, tama drums, paiste cymbols etc….

How do you see a differences compared to the split with Crepitation and Castrated? How did it happen you released common cd? What could you tell about actual situation with these bands?
We think the album is a huge step up to the split, it shows our progression as a band with the songs, the structures and the general technicality of what we were playing. as for the release of the split all the bands had played together and we were all buddies, none of us had released anything at that time so we all decided to get together and release a CD featuring all of us, we all thought it was a cool idea. crepitation and kastrated are still together, crepitation dont do much because all the members are in different bands and live all over the UK, however they did release some promos not too long ago, as for kastrated they are currently working on a full length.

I have seen Crepitation on their show on OEF 2009, it was amazing. They are probably very humorous and heart-lighted team hehe… Are you too? Are you good friends? Have you any common parties?:)
Yeah crepitation dont take themselves too seriously which is cool as for us, as idividuals we are a bunch of idiots and always up for a laugh and a party but we do like to keep our live shows as professional as we can, we like our shows to be really in your face and as brutal as possible, so our funny sides dont tend to come out when we are on stage but we dont take our selves too seriously i dont think. we are friends with crepitation and see them every now and then which is cool.

Did it motivate you differently that you landed on Candlelight Records? Any words about the conditions of your deal? What could you tell about your cooperation with Grindethic, Siege of Amida Records in the past?
We had already done the album on siege before we officially got the deal with candlelight in the US so our motives didnt change at all really, we were just happy to get the album out over there.

I know you’re doing lots of concerts in Great Britiain, but what about outside of the country? When could we expect you European Tour?
We are busy for the next month or so with a few tours in the UK which we are all really excited about because we are doing our first headline tour, as for europe we hope to get back there again later this year but we will see what happens, we love it over there so we will all we can to get back and please all our fans. 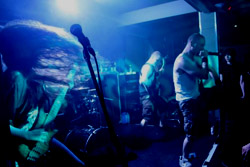 You played a tour with Black Dahlia Murder, nextly you will play a tour with Carnifex. They are very famous bands in this moment. How did it happen you support them? Do you listen their music?
Well it was a honour playing alongside the black dahlia murder, we had the best time with those guys and all the other bands, we are all massive fans of all the bands on the bonecrusher tour so it was really amazing that we were given that opportunity, our lable was a big help gettin on that tour so we were really appreciative about that. we got out with Carnifex again in the next couple of weeks and we can not wait for it, be good to play alongside those guys again.

What do you think about the popularity of deathcore genre? Do you feel a part of them in any aspect? In your music I listen some influences of core and I know you like hardcore like Terror, Hatebreed, Knuckledust… I`be listened the opinion in Poland that you are nearer to bands like Suicide Silence now (compared to your stuff from split)…
Im all for the deathcore genre, there are some really good bands out there to check out, as for the popularity of it i think its cool, it opens up a lot of people to heavier music, with that though comes alot of bands just jumping on a trend to get popular, alot of bands in the deathcore scene somtimes just write the music to get big as quick as they can and dont focus enough on the music itself which for me gives them no musical integrity at all but like i said there are alot of decent bands. we are all fans of hardcore which does sneak into our music every now and then, we like to appeal to the death metal kids and the hardcore kids so yeah we do feel part of the deathcore genre which we dont mind. at the end of the day we see ourselves as death metal if other scenes enjoy our music thats cool with us, we dont want to isolate our fan base to one genre so if we appeal to all types of metal we can only embrace it.

To someone who hasn’t heard your music how would you describe it?
Fast, brutal and blugeoning!!! 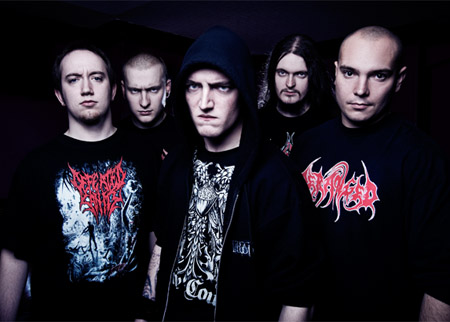 Could tell me something about your vocal technique? Have you any “tricks” to make your voice deeper? How long did you learn to get this great results? Who is you death/grind vocal master?:)
Jay is our vocalist, his technique is pretty much just growl as loud and hard as he can, he doesnt use gutturals or inhales just straight up growling, everyone has their own way of doing vocals and their own style, jays style works best for the music we write so we cant complain at all. 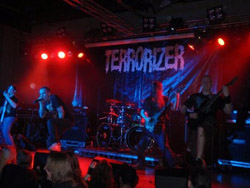 You have a interesting frontcover. Could you tell something about the author, concept of that?
The man who created our front cover is legendary death metal cover artist Toshihiro Egawa, as for the concept we gave him the lyrics to the song ‘cremated existance’ and he came up with that with his own imagination, as soon as we saw it we were all blown away and couldnt be happier with it, it really suits the album.

What is the element of music Ingested, which you like the most and which you don`t like too much?
The ingested sound is just basically to combine technical and heavy riffs with punishing grooves and breakdowns. we like to keep the structures interesting and as catchy as we can.

How big a role do the lyrics play for the band, and music?
The lyrics are very important, we pride ourselves on having offensive songs, we are well know for our shocking content which attracts alot of people to our music. the lyrics and music go hand in hand together.

You have a video to “Skinned And Fucked”. What do you think about the promotion the band on youtube? Are you often using youtube? Which are you favourite metal/hardcore videos?
We have had some really good promotion on youtube and it is a useful tool for bands, our video to ‘skinned and fucked’ has had a lot of hits which is good promotion for the band, we have a lot of cool live vidoes on there which is good for people who have never seen us live to get a little taste of what we can do. some of my favourite metal videos would have to be Despised Icon – In The Arms Of Perdition, Suicide Silence – Wake Up, Job For A Cowboy – Embedded, Through The Eyes Of The Dead – Failure In The flesh.

To vary this thing a bit before we approach the end, d’you have any hobbies, interests, collections etc outside your bands that you can tell us about?
Our vocalist is a massive movie fanatic so he collects alot of films, usually horror and gore films, brad our bass player is a massive gamer and i collect Spawn comics. as for hobbies, we all like a good drink at the pub.

What are your goals from now on?
We are currently writing our next album so we hope to get over to the states next year to tour it, we just wanna keep doing what we are doing, play more shows, do more tours and keep gaining new fans.

Anything you’d like to add to conclude this interview?
Thanks for the interview, keep supporting ingested, come to a show buy some merch and come party with us, see you on tour!!!