Hi there! Latest you were get place in a split, what are you doing nowadays? How is going in Russia?
Hi! We have some changes in our line-up and music too .In general, band is active: at every turn writing the songs, recording something. This is real hard winter in Russia now. To the point, you’ll hear our old stuff on the split, old-school death-grind. I hope you will like that. 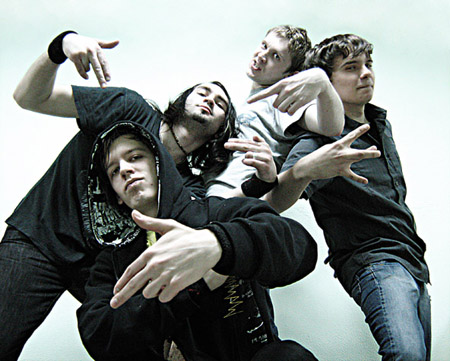 Let’s talk about your last album “Incredible Stories From Daily Humans Life”. I think it’s an interesting album, you used synths like industrial bands. Where did you get the idea ? 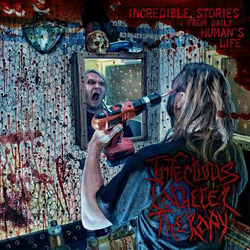 The album came out as versatile. The synth idea is mine and our bass player. We decided to make goregrind more… dancing LOL, though others already did something else, Ahumado Granujo for example. Now we’re going to turn it down, except making some intros maybe.
By the way, there is one fully electronic composition on the split 😉

I was scared for a moment, when I listened the intro. I thought I was getting something like nu-metal, rapcore etc. 🙂 As you know, they were very popular 4-5 years ago… What do you think about the music of these genres?
I like hip-hop music, like scratches and low bass, so I made that intro. Nu-metal and rapcore are very interesting styles, I see nothing disgusting in such music, sometimes I like to listen to meaningful bands, but thee attract me less than grindcore for example)))

I must ask about “8 Bit Disco outro”. I’ve listened something like that before. It was going like this, but then, they played the same thing with guitars and drums, which I’d liked very much. That is so funny. Which program did you use?
Yes, 8-bit music always excites the smile, I guess everybody liked to play Nintendo in his childhood. Now it is a separate area in the music. We were using different free VSTi-synths and samples you can find in the internet, this is all simply.

What is the ideal source of inspiration for writing lyrics or composing songs?
I think, the perfect inspiration source is the love to the music you do, and you wouldn’t reach any result without it. I like how grindcore sounds, there is something bracing in that. It would be apropos to use McDonalds slogan: im lovin it!

I like funny things in this genre. You look like funny guys, when I look at your promo photos and photos in your album booklet. What are you doing in ordinary days?
I suppose, it’s hard to live without a humor. Concerning to the ideology, goregrind is a black humor for me, joking on something bleak and rotting. If people applies kind of seriously to the death-metal, otherwise goregrind is a pure grotesque, mockery and the absence of common sense sometimes. Just try to think of old gore-movies, where the ketchup-like blood was being jetted, rubber fingers, hands and heads were being cut. It is so naively, affected and funny. Goregrind, I consider, merges all this. Even these yells and pukes through the pitchshifter: you can hear them in horror movies in monsters dub. 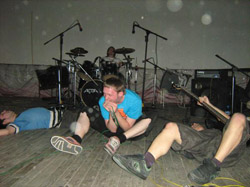 How are your concerts, how is your communication with the audience?
At this time we have no any concerts and rehearsals, cause all the members live in different places: cities and countries. The work takes much time, so we exist as an internet and recording-only band. I think it is better than kick the bucket and write R.I.P., isn’t it?)))

As I approach to the end of this interview, I have to know something. Suppose death metal, grindcore, death-grind, etc. didn’t exist and writing lyrics about sex and gore were illegal, what would you do? Would you still play music? If not, which genre would you choose?
I think we just would be illegal and become famous instead of this. Everybody likes the forbidden fruit. Many band In USSR times became well-known due to prohibited music playing.

Usually, I listen to this kind a music while drinking beer. But, beer may not sound tempting to you, since you live in a cold country. What mood should we be in while listening Infectious Catheter Therapy? Which drink goes best?
Listening the IxCxTx, I would advise to drink more Russian vodka and having fun. BTW, russians also like beer and drink it even in frost. So get beer, vodka, IxCxTx to your acoustic and full loudness. I wish you good time. 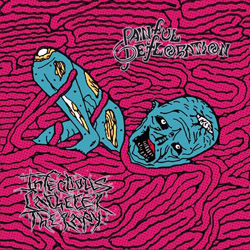 I hope you are not a vegetarian as a gore lyrics writer. I guess Turkish people might be a little assertive about gore. How good are you about eating offals? We Turks like to eat “Kokorec” after drinking; it’s a barbecued lamb intestinal 😀 Did you eat something like this before? Or lamb cheek, brain, lung, liver, heart, kidney, especially rumen? We even drink rumen soup here…
Of cause I’m not a vegetarian. In Russia folks like meat and they prepare various dishes using the pluck and skin, so we are not lagging from you. Surely taste Russian meat dumplings, if you were not trying already. Highly recommend.
OK, I will try it if possible :))

Yeah, after this putrefacted question, I’m about to finish my interview. When will we hear something new from you?
I shall not do loud notices, it’s very difficult to issue something. For now we want more splits. Mostly, there will be appear few tracks from new material on myspace.

I think that’s enough, do you want to add anything else?
Thanks a lot for this interview. I was glad to talk to you and was surprised that we are listened in Turkey, it is pleasant. I hope we’ll make you happy with our new songs and releases. Sorry, if I was laconic, it’s really shortage of time. Hi to all goregrind fans, this is excellent music.