Belgian progressive death metallers IN-QUEST will release their eight album, “8 – The Odyssey Of Eternity”, on September 1st. The follow-up to 2009’s “Made Out of Negative Matter” was recorded, mixed and mastered at Split Second Sound with producer Jochem Jacobs (ex-TEXTURES). The artwork for the CD was created by Trine + Kim Design Studio.
Commented artwork designers Trine Paulsen and Kim Sølve: “The front cover illustration is an octagram and pretty much everything in the artwork is built solely upon an obsession with the figure 8 and eternity. We wanted the artwork to have some of the grandioseness that we feel the concept imply…” 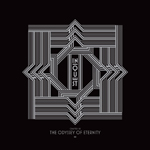 Tracklist:
01. Enter Eternity of Lethargy
02. Taedium Vitae
03. Elliptical Orbits in Disbelief
04. Reiterated Cycles of Celestial Spheres
05. Neo-Pseudo Existence
06. Infinite Sleep for the Hollow
07. The Algorhythmic Alignments
08. Yearn to Return [liquidation fails]
The third in a series of webisodes featuring behind-the-scenes footage from the studio can be seen below.

IN-QUEST recently re-released 2009’s “Made Out Of Negative Matter” digitally on iTunes, Spotify, Deezer and others. A new version of “Stahlmacht” was added as bonustrack.