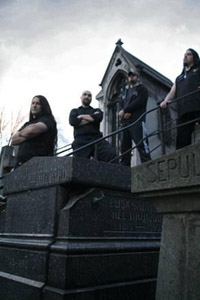 New York death metal legends, IMMOLATION, recently entered Sound Studios in Millbrook, NY with longtime producer Paul Orofino to record their ninth full-length album. The follow up to their 2010 release Majesty and Decay, will once again be mixed and mastered by Zack Ohren (ALL SHALL PERISH, DECREPIT BIRTH, SUFFOCATION).
“Just got out of the studio a couple of days ago, here in Europe now getting ready to do some open air festivals,” commented guitarist and dead ringer for Anton LaVey, Robert Vigna. “The new album will have 10 tracks of some of the most intensely dark material we have ever written! Very powerful and very heavy. Steve (Shalaty – drums) really pushed it all to the limits on this one too.
Once again we went up to Millbrook, NY to do the main tracking. Paul Orofino got us some of the best sounds we’ve had yet! We were there for two weeks laying down tracks, having amazing Belgian beers at Paul’s in house bar ‘BarFunGul’, as well as plenty of BBQing! Throughout the time we were there we got through one blackout and dodged a very intense storm system that had the potential to cut our recording session real short. Luckily everything worked out. We still have to add some last touches on to the songs etc., as well as have Zack Ohren mix and master it all but so far everything is off to a great start.
Be certain that this new album will surely be one of our strongest yet. We look forward to getting it all finished up soon and getting it out there as soon as possible for the fans!”