Welcome to the pages of Extreminal Webzine. First of all please present your band to those who may still don’t know your name?
Well hello there! And thank you for the interview! Human Rejection founded by me (Alex) back in the august of 2005.Also came up with the name and the very first logo. we ve released 1 ep human rejection ep 2005 and two full lenght albums : torture of decimation and decrepit toinsanity and tour 2 times the europe and play some big festivals along with great bands such as Dying fetus Misery index Suffocation and many more.We had some probs as all bands so that caused the break up of the first line up back in 2010.since that day i was trying to focus on some other stuff had some personal probs that kept me out of the scenefor a while.Then i moved to Austria.and the day came that i spoke with the current drummer of the band Dani from Germany.Jim the guitar and Michael the bass player from Florida USA entered the band asap..all the guys are into many projects togethere like :Doomsilla Diabolation Cystic dysentery Bandwhore.so its kinda like a project phase for HR now.but we are working on a new album.e have 4 songs we work on em.as for live shows im sure we ll work something.but we need to examine it good..but its going tobe ok!O
h Michael is also the bass player for Monstrocity and Vile.. 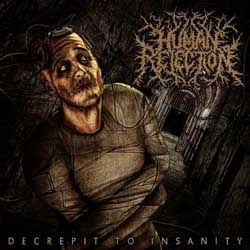 "Decrepit To Insanity" is your last album from 2009.What happened in the time between 2009 and now ? What have you been up to?
Well after the release of it we made a european tour with the old line up.we promoted the album and stuff.and we started to work on what was going to be the next album.we had many songs..and it was goind really good.until the time that i noticed that some people were not into this so much.along with other problems and stuff happened back then i was the only one that remained in the band.to make it clear to you.canceling shows 1 or 2days before.choosing theplace to play cause u see ghosts be not in the centre of publicity cause you simply had someone else to do it for youfor years and suddenly realise that u are known to noone at least to our small scene makes you having complex.more clear?? iwas the one that brought the record deals booked all the shows we played made all the connections..i was the manager singer promoter.some people didnt like that.so they runned out.you see the best line up is now in HR.everyone promotes interests in the band and do the stuff we should all do..and this is the only time that theband works like a good engine.love the new guys u will love em too..dont want to remember the past line up.greatfull for what we achieved tho..

Are you planning to release a new album and if yes – when ? Give us some more details about your future plans?
Of course we are going to release a new album!we all working on that.as i told you above we have 4new songs.we ll rerecordsome of the unreleased tracks of the band and we are under talks for a good cover or a strange cover.all that a band have to do.covers lyrics.we ll try for a good or the best for us deal and then we ll see what we need to do to promote it! 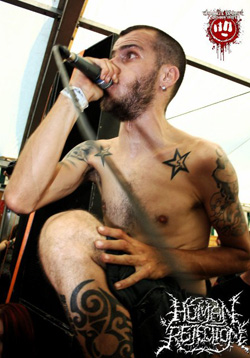 You are signed to the UK’s label Siege of Amida Records.How did you manage to sign with them and are you fans of some of their bands?
That was an old deal.we are on with em anymore.i personally used to be their fan.and liked some of their bands.i can say i do the same now.i only lke some of the bands stillt tho.it was a good deal anyway.but the band broke up.

How do you define your style ? I would say it is a slam brutal death metal but maybe you have another definition?
i think you are right.thats exaclty our style.but for me is better what the fans think.for someone it can be slam death for another death metal..but on the other hand for another one can be rap..we respect everyones opionion

Which are the bands/musicians who influenced you to start playing music?
ok i have to speak for the old days again.haha.cause we talk for the very first days.well Pantera Devourment Cannibal corpse Desised icon and the 2 biggests of all Dying fetus and Misery index!!

Do you use any special effects for the vocals or it is all natural?
no nothing at all..that comes out as natural as it can be.everyine thinks i do..but i dont.i can prove that i dont lie haha.it just hurts a bit.but what can we do??

How do you see today’s brutal death metal scene ? Are there enough talented extreme bands ? How is the scene in Greece in this direction?
I think after we and Inveracity Vulnus (i speak for our sound only) started to make record deals with foreign labels touringthe europe and playing and opening for acts like Dying fetus and Suffocation we opened the doors and the ears for lots of fans to check greek scene too.there are enough here yes.You guys should check Cease of breeding!!they kill man!!and their side project Vredens Tid!!man it gonna blow you away!also check Insane Court!these guys have everything!!the scene is big now..and as i told i feel that we and inveracity especially opened lots of doors..it may sound shitty..but its the truth.. 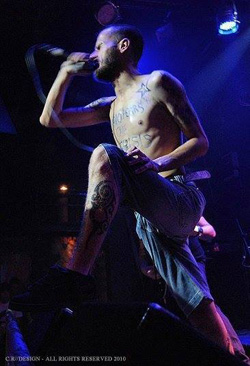 What’s your opinion on deathcore ? Bands like Suicide Silence,Oceano,etc.?
Man..my favourite band that wins everyone is Guns n Roses.first band i listened to.and i still do and i will do.im a big fand of 80s hard rock and metal.of course i lke deathcore bands and sound.not all cause to be true lot of bands sounds the same nowdays.but when it comes to Suicide silence Despised icon Beneath the massacre The red chord i m fucking in!my opinion is that im not a close mind man.i wont say hey i dont like thei hair and clothes so they suck.or hey they dont use full blast beat so they suck.not at all.if they play good i listen to em and like me..

How do you see today’s political situation in Greece ? Do you see any exit from the tough economical situation ? What do you think about the extreme right party that enter the parliament?
I think some people in Greece forget what their grandfathers and grandmothers suffered from the very recent ww2 by nazis army.and voting for a party of some stupid wannabe hitlers that they think that their problem and greek problem is the immigrants in their country and not the politicians that earn 30000 euro pro month and steal every day every greek man like they do in italy spain france portogual with their so wannbe be crisis.i think its just their plan to eradicate /to have 2 levels poor and rich and make their profits of oil gold and all that shit.i dont see a good birght day coming soon for Greece.But i hope it will come..did you know that in an area in greece founded gold that costs 16 000 000 000 000!!!.wont speak for the oil in creta in greece that can supply the world for decades and decades..and cost like 10 times more than the gold costs.and thats something that foreign scientists said not me.a cost that can buy their so wannabe crisis..not only greek.italian spanish etc.so tellme now.there are not some big bosses outthere controls everything and want to humiliate contries and their people to buy it for free so they win millions after?your choise!

Do you have a favourite album for 2013 and if yes – which one?
No..not yet.nothing did something to my ears.the best thing i heard in an while is Vredens Tid.check them out

Your final words for our readers?
I wanna thank all the HR fans that kept their faith to us..and to me through all the last 4 years.and averynone and single that supported and keep supporting the bands..be sure to get a great album from us!
thanks to you for the interview once more!
and i would love to see the whole humanity united just once.and see whos the real problem out there.