Italian death metallers HOUR OF PENANCE will release their fourth album, “Paradogma”, on March 30 via Unique Leader Records. The CD cover art was created by Gyula Havancsàk, who has previously worked with such acts as ANNIHILATOR and DESTRUCTION. 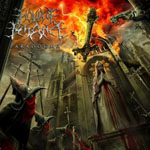 “Paradogma” was recorded at 16th Cellar studios in Rome with producer Stefano Morabito and was mastered at Hertz Studios in Poland.