Danish black metal band HORNED ALMIGHTY will release their new studio album, “Necro Spirituals”, in Europe on October 25 via Candlelight Records. Recorded in May-June 2010 and mixed and mastered by Jacob Bredahl (HATESPHERE, KOLDBORN) at Dead Rat Studios, the CD is “comprised of the strongest and most fierce material written in the band’s eight-year existence,” according to a press release. “Yet again, crushing all doctrines and rules with their ‘don’t-give-a-shit’ take on black metal, as a testament to all that is extreme.“ 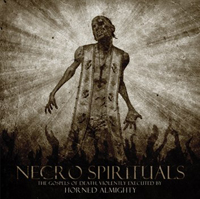 Tracklist:
01. Necro Spirituals
02. Fountain of a Thousand Plagues
03. Sworn Divine Vengeance
04. Age of Scorn
05. In Jubilation and Disgust
06. Blessing the World in Pestilence
07. The Illuminated Void
08. Blasphemous Burden
09. Absolved in the Sight of God

Click here to listen their sample from upcoming album.