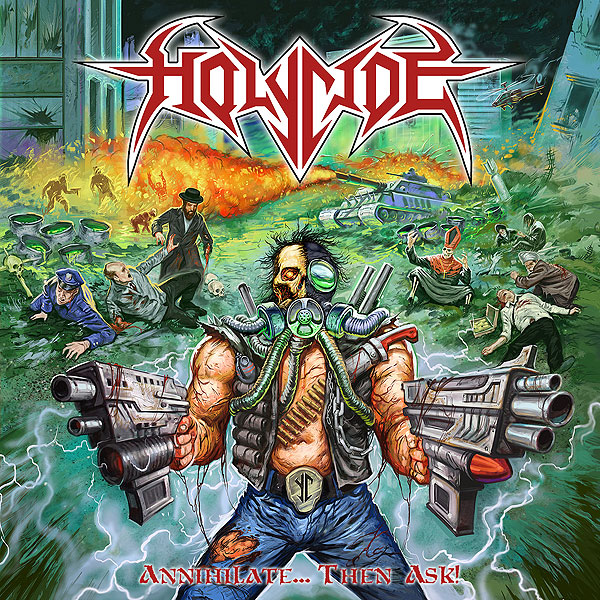 Spanish thrashers HOLYCIDE, featuring Dave Rotten from AVULSED on vocals (but on a total Thrasher register here), have just revealed the cover artwork for what’s going to be their first full length album that will be entitled “Annihilate… Then Ask!” whose recording phase has been finished and they’re now in the mixing process. Release for the album is scheduled for January 2017 through Xtreem Music.
Cover artwork for “Annihilate… Then Ask!” has been made by renowned artist Andrei Bouzikov (MUNICIPAL WASTE, TOXIC HOLOCAUST, SKELETONWITCH…) and for what you can see, it’s a total Thrasher cover!!
The album will contain nine brand new songs as well as a cover version of legendary US Thrashers DÉTENTE and this is what the band said about the album: “We were in doubt between an abstract, transcendental, modern and post-whatever artwork to demonstrate we’re so fucking mature, but in the end our natural born stupidity and lack of originality prevailed and since we’re a Thrash band without modern bullshit, we decided to go for a cover that’s total fucking 80’s Thrasher as hell!! Regarding the music, we can assure it’s way superior than our previous EP, a fucking killer album!”.

Blast Off- Government of Money