Los Angeles Prog-Thrashers HeXeN have officially released a premiere new track entitled “Stream Of Unconsciousness”, which comes off from the new album “Being And Nothingness”. To listen to the new track, go to the Pulverised Records SoundCloud Page to stream the song in its entirety here.
The release dates for “Being And Nothingness” have been scheduled on 28th of May 2012 for Europe and 17th of July 2012 for North American territories. 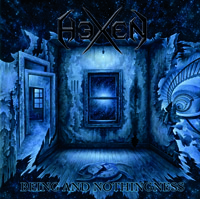 Tracklist:
01. Macrocosm
02. Grave New World
03. Defcon Rising
04. Private Hell
05. Walk As Many, Stand As One
06. Stream Of Unconsciousness
07. Indefinite Archetype
08. The Nescient
09. Nocturne –
i. Opus 55 № 1 in Fmin
ii. Out of Reach
iii. Existential Crisis
iv. Entrance of the Absurd
v. The Unbearable Lightness of Being
vi. With Salvation I Persist
vii. Elegy of the Night
viii. End in Purplexity