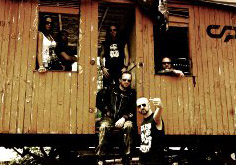 Season of Mist announced that French black metallers HELL MILITIA just joined the ranks of the Underground Activists division.
“Hell Militia are really enthusiastic about that new signing with SOM. We join many of our comrades and have known some of the SOM guys for quite a long time so it had to happen someday. There has been a lot of work on the new album, and it was composed in a very special way, far from everything, and even now we are still hard at work on the mix. We can’t wait to have the final result in our fucking hands, for sure the sickest opus of Hell Militia. A small animal suffocated by mean children. Hallelujah Motherfuckers!”
The band’s third full-length, which title is yet to be unveiled, should hit the stores later this year.