Formed in 1984, Heathen was part of the first wave of Bay Area Thrash bands that helped establish a genre of heavy metal that remains popular to this day. The success of “The Evolution of Chaos” allowed Heathen to film a promotional video for the song “Dying Season,” and to tour Japan and Europe, visiting several countries for the first time ever. The band finished up 2010 with a series of successful shows, including some U.S. shows with Exodus, and 2011 is looking to be an even busier year with Heathen preparing to go back to Europe with Overkill and Destruction as part of the Killfest tour in March, then across North America with Destruction in April and May. I had a chance to talk with Kragen about their tour, their latest album and their comeback to the bay area thrash scene.

Hey, thanks for taking the time to talk. How’s everything going?
Kragen: Great, we’re on the road right now travelling to Texas for a couple of shows. So just relaxing for the time being (laughs). 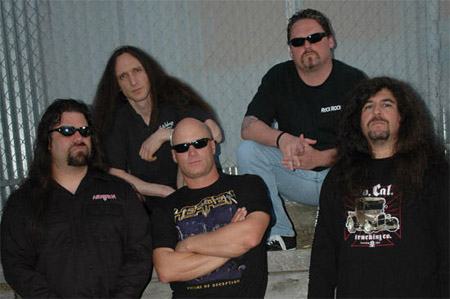 Can you give us some background as how Heathen came together?
Sure, Lee started it back in 1984 and the first album “Breaking the Silence” came out in 1987 on Combat Records. We started to do some touring and we released a second album in 1991 but then we put the band on hiatus when Lee joined up with Die Krupps, we never broke up though. We came back in 2001 to do the Thrash of the Titans concert and that’s when we started writing material for the new album. 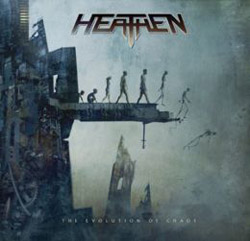 Since it’s been about ten years since the last album, what were fans reactions to “Evolution of Chaos”?
It’s been really great; we’ve had nothing but great feedback from fans. Especially in Europe. The only thing about the U.S is while the feedback is good the distribution is not that great at all.

What are you guys doing right now?
Right now, we’re in the middle of a tour with Destruction, it’s been really great. We have about six more shows left with them. Then Lee is going to be touring with Exodus in the fall.

You’ve been doing a song with Destruction every night, how did that come about?
(Laughs) I actually talked them into it. This is from the “Release from Agony “album and they didn’t have a second guitar player to play the song live. So I told them that I wanted to learn the song and play it with them. It’s been really great; I’m honored to be able to play with a band like Destruction. 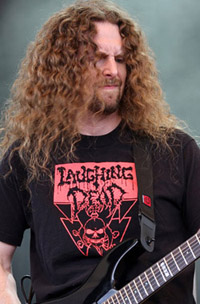 What do you think of the metal scene these days, as compared to what it was like back in the eighties?
It’s definitely different. There’s no MTV like we had back then to bring it to a bigger audience but I think it’s definitely coming back. Especially when you have something like the Big 4 touring. Ya know, kids who like Metallica but don’t know about Megadeth or Anthrax will get to be exposed when they go to these concerts.

Who were some of your influences over the years?
I pretty much listen to all kinds of music. From jazz to death metal to classical. Of course all the bay area thrash bands and the greats like Ozzy, Iron Maiden, and Metallica. As far as guitarists go I’ve always loved Randy Rhoads and Marty Friedman.

Well, thank you so much for taking the time to do the interview I really appreciate it!
Anytime, thank you!