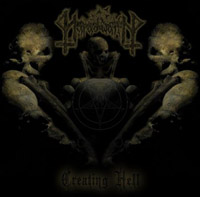 HARADWAITH, the German black metal band featuring former ENDSTILLE  frontman Iblis, has posted a rough-mix version of a new song, “Reconstruction Of Chaos”, on its MySpace page. The track comes off the group’s upcoming debut album, “Creating Hell”, which is scheduled for release in early 2010 via Abhore Records. The CD was recorded at Jak’s Hell studio in Germany, where all the ENDSTILLE albums were tracked.