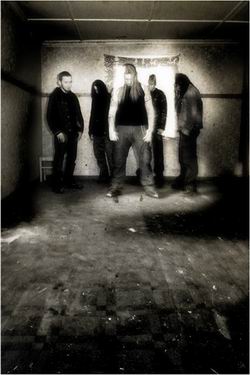 This interview was made with HANGING GARDEN’s vocalist Ari Nieminen and bassist/ keyboardist Matti Reinola who were really very talkative and replied to my questions. Here’s what they said…

My classical first question is about to cover my curiosity as a fan. How did you end up with this name for the band? A repeatedly mentioned question but yes, I’m curious to find out!!
Matti: Well, we thought about the name for quite a long time before deciding and if I recall correctly, ”Hanging Garden” was supposed to be a temporary name for the band. During the time it started to sound more and more suitable for our music, so it remained. It’s taken from a song title by ”The Cure”, just came to my mind someday, as I am a huge The Cure – fan. The fact that it also has a historical meaning, ”Hanging Gardens of Babylon” being one of the Seven Wonders of the World, just made the name even better.

I know that the band started by you two, who both play in different style bands. Dauntless is a thrash/ death metal band while Shamrain is a gothic rock band. Weren’t you satisfied by what you play with your main bands and decided to make HANGING GARDEN? Does this mean that you maybe love this new “child” more and leave your other bands or what?
Ari: Well we just thought that it would be a good idea to try this kind of music also. I love all of my "childs" so that doesn’t change at all. It just gives more to us in a whole.
Matti: Same here, I have enough time for both bands and they´re both really important to me. The main reason for starting HG from my side was the fact that my former metal band was put to rest. Being a long time metal fan I just needed to have a metal band also. So you’re partly right, Shamrain didn’t satisfy all my needs, but now I have a perfect balance, hehe.

You got a deal with a record company really easily. Do you believe this is a reward for what you play or the fact that you were already active in the scene helped somehow?
Ari: I think that we were just lucky. Nowadays here in Finland you can get a deal just for playing in a metal band. But to get the "right" deal is the main thing that I, and usually we, point at.
Matti: Yeah, we were lucky in that way, that our promo ended up in the hands of the right dude, who diggeg it a lot. And our experience probably didn´t do any harm, as i think of the result how the promo sounded. It came easily this time, but hell, I don´t even know the number of previous demos we have recorded in the past with our bands. 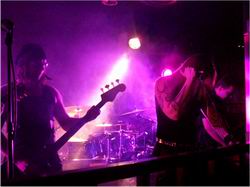 What are the themes that inspire your lyrics writing? Who’s the lyricist in the band?
Matti: I wrote most of the lyrics for this album and Saku for one song. But everyone in the band is free to write, as long as it´s good stuff. Maybe I´ll just keep for myself the power to decide that, hehe. ” Inherit The Eden” is quite near to a theme album. It´s all about us, humans, destroying our own planet and not caring about the future. That’s it in a nut shell.

Many say that Finnish bands can be extremely sad due to the weather up there that somehow “promotes” sadness in your minds. Is this true?
Ari: Maybe so. The winter is long and if you are easily deprsessive, one can really suck to live here. But usually we, Finnish folks like winter. It depends how long it takes. The climate has changed here like the earth does, so the winters are coming easier here also. I like good snowy winters but maybe for a month or so.

And which are your main influences? The bands that made you most wanna write such stuff?
Ari: Well for me singing keeps me going. But also there are many bands like Katatonia, My Dying Bride etc.
Matti: Old english gothic/doom metal bands such as Paradise Lost and Anathema, the early 90s Swedish Death metal and all the music that has a lot of emotion in it. The Cure is still probably my biggest personal influence of all time along with film scores by Angelo Badalamenti.

Finland has a lot of bands and I guess metal music is somehow “traditional” in your country. You even managed to win Eurovision last year with a rock/metal band, something that happens for the first time in this competition. Do you believe you can be something special in the scene or are there so many bands that one is lost among the rest and only a few really succeed?
Ari: Like I said before here in Finland we have so many great bands that it’s not easy to be "different" but in our case thats not the problem cause we like just the way we want to do it and fuck the rest. It’s not easy but what is?
Matti: I don´t even want to be a part of any Finnish ´metal scene´ as to most it means happy metal such as Lordi or Thunderstone or other crap. I think we will just do our stuff, heading deeper down in sorrow and darkness with our music and maybe one day we can stand out from the scene. If not, it don´t matter as long as we´re personally pleased with the music. 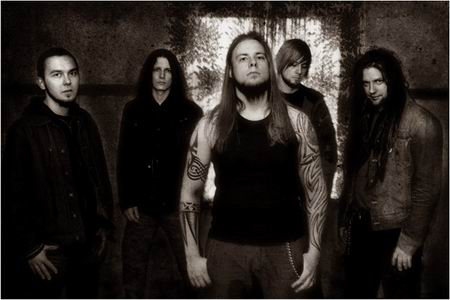 When I first heard your album I thought you have a lot commons in your sound with SWALLOW THE SUN. What would you reply to someone who would tell you’re somehow copying them? (I don’t believe that by the way)!!!
Ari: Hehe… nowadays with this music genre, it’s quite common to be mentioned as "follower of the Swallow etc". Of course it’s great to be "accepted" to be as good as those guys cause I like the music but if you really listen to our music you can hear the difference.
Matti: Of course it sucks in that way, that people think we´re copying Swallow, when it´s more like we have the same influences. Hell, I was listening to english death/doom before Swallow’s singer was even 10 years old. Regards to Mikko by the way. 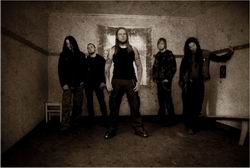 Ari’s voice is very expressive but it’s always growls and grunts. Have you thought of putting any clean vocals in your songs? (However I love this kind of singing with death vocals in total)!!
Ari: I have always growled so this is the thing that I know best. Clean vocals are a "maybe" but don’t put your hopes for that one;) Nowadays I can sing in a tune but I think that my voice is not good enough to be present in any album.
Matti: Last weekend Ari demonstrated his normal singing voice to me, and it was promising, even though we were quite wasted, so I can´t be sure 🙂 So who knows, maybe you´ll hear it in the future. We can also manage with Ari’s growls alone, which by the way is one the best in Finland in my opinion, more than well. No guest vocalists coming.

Are there any plans for touring?
Ari: Not right now but if something good comes we will keep you and our fans informed.
Matti: Yeah, now we´ll just do some weekend shows in Finland, but hopefully later a proper tour also.

Thefact that you’re active in other bands too, is making it any difficult to act as a normal band? I mean now that you have arranged some gigs and Janne is touring with his band you were forced to have another drummer. This could also happen with other members. How are you gonna face this problem? Is it easy to have session musicians and still make the same outcome when playing live?
Ari: This is a difficult but quite normal problem here in Finland. Almost every musician plays in quite many bands. Sometimes you just have to cancel and sometimes you can get a session man or a girl. 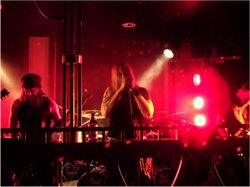 What ideas would you add to your music to make it different than the rest of the bands playing in this area?
Ari: We just do our thing.
Matti: Yeah, better do the stuff that comes out naturally, than to try to force yourself in some direction just to be different.

How well have you been accepted so far by the audience?
Ari: Quite well being this "all star band whose just copying Swallow etc" 😉

“Inherit the Eden” is, to my opinion, a very good album which should be in a doom metal fan’s collection and it just came out. How soon should we wait to listen more of you? I know it’s more than early to ask this but I think everybody who has listened to your work is impatient to have more!!
Ari: Thanks again:) Its always great to hear that our music gives cause it takes a lot also from us. For more to come we have just started to do more songs for the second album. Can’t promise anything yet.
Matti: I hope we can get the next album out in 2008.

Is metal music a way of living your life, a hobby or both for you?
Ari: Well, I live like I want and now I’m quite happy although I have to do "normal work" also just to pay the bills, so that sucks.
Matti: I´m just a ´musician´ at the moment, and I like it. Only downside is that I don´t have money, but who needs it anyway. Music takes a lot of my time, but I ´m still far from being able to call it my profession, but again, maybe someday. 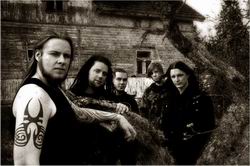 A question I would like especially Finnish bands to reply is the following: SENTENCED decided to really “bury” their band while it was at its peak, selling a lot and touring and having thousands of fans. Would you do something like that, stop being active at your best or the passion for music wouldn’t let you see how you look and sound?
Ari: Yeah maybe.
Matti: I think it was a great and cool way how Sentenced ended it´s action. I just have such a passion towards music that I think I can never end. But you can always bury the bands and start something new.

I would like to thank you for this talk and let you finish this the way you want saying anything you want 🙂
Ari: Thanks a lot for the great interview. See you on tour I hope and thanks for the fans who keep us hanging;)
Matti: It´s coming, silent night arrives…