”Hands of despair” started as a solo project back in 2008. It took 3 years and 2 solo albums to finally find the real sound of what HoD was meant to be; a mixture of the heaviness of death metal, the intensity of black metal, the ambiance of doom metal and the complex structures of progressive metal.  The end result is a unique blend of all these elements creating a sound that Hands of Despair definitely make their own. 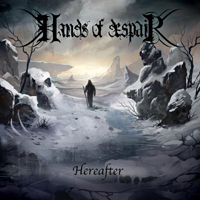 The album features guest appearances by The Faceless’ Lyle Cooper on drums and Daylight Dies’ Egan O’Rourke on vocal duties on two tracks.
”Hereafter”, will be available for the first time on CD later this year and will feature a Bonus Track.
In the meantime, you can:
Listen to “Shattered Memories” on SoundCloud.
Check out this interview featured on decibel magazine’s Deciblog.
Follow HoD on Facebook.