Dutch death metal band HAIL OF BULLETS has set “On Divine Winds” as the title of their second full-length album, due in North America on October 12 via Metal Blade Records (one day earlier internationally). The band recorded 11 songs plus an intro for the CD, which, like its predecessor, was produced by Ed Warby was mixed by Swedish producer/multi-instrumentalist Dan Swanö (EDGE OF SANITY, BLOODBATH, NIGHTINGALE). The limited-edition version of the album will be made available as a digibook, including a bonus DVD. 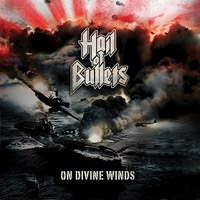